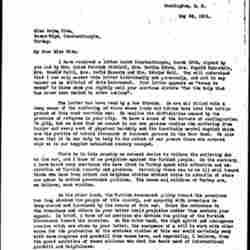 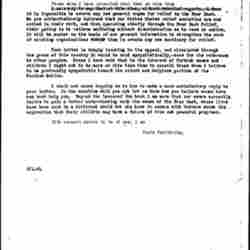 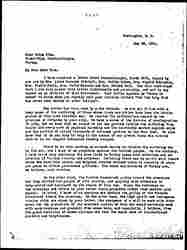 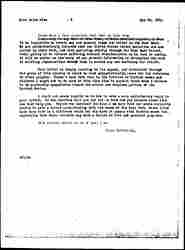 I have received a letter dated Constantinople, March 12th, signed by you and by Mrs. Azizé Ferrouh Kibrisli, Mrs. Refika Edhem, Mrs. Fayzié Fahreddin, Mrs. Saadié [Halil], Mrs. Safié Hussein and Mrs. Nézihé Veli. You will understand that I can only answer this letter individually and personally, and not in any manner as an official of this Government. Your letter appeals as "woman to woman" to those whom you rightly call your American sisters "for the help that has never been denied to other nations".

The letter has been read by a few friends. We are all filled with a deep sense of the suffering of those whose lands and cities have been the battleground of this most terrible war. We realize the difficulties caused by the presence of refugees in your city. We have a sense of the horrors of conflagration. We pity, but we know that we cannot in our own persons realize the suffering from hunger and every sort of physical hardship and the inevitable mental anguish which are the portion of untold thousands of innocent persons in the Near East. We also know that it is our duty to help to the extent of our powers those who endured what we in our happier untouched country escaped.

There is in this country an earnest desire to relieve the suffering due to the war, and I know of no prejudice against the Turkish people. On the contrary, I have heard many Americans who have lived in Turkey speak with affection and admiration of Turkish honesty and goodness. Certainly there can be no ill will toward those who have been silent and helpless victims without voice in councils of state nor power to affect government policies. The women and children of Turkey are, we believe, such victims.

On the other hand, the Turkish Government policy toward the Armenians has long shocked the people of this country, and sympathy with Armenians is deep-seated and increased by the events of this war. Hence the reference to the Armenians and others in your letter would prejudice rather than sustain your appeal. In brief, I know of no American who defends the policy of the Turkish Government toward the Armenian. On the other hand, the high spirit and courageous resolve which are shown by your letter, the emergence of a will to work with other women for the protection of the wretched victims of this war would certainly meet with warm response and goodwill from women here, and especially, I believe, from the great societies of women citizens who feel the basic need of international goodwill and helpfulness. [page 2]

↑Those whom I have consulted feel that at this time↓ [illegible] it is impossible to create any new general organ for relief in the Near East. We are authoritatively informed that our United States relief societies are now united in their work, and that, operating chiefly through the Near East Relief, their policy is to relieve suffering without discrimination as to race or nation. It will be easier on the basis of our present information to strengthen the work of existing organizations rather than to create any new machinery for relief.

Your letter is deeply touching in its appeal, and circulated through the press of this country it would be read sympathetically, -- save for the reference to other peoples. Hence I have felt that in the interest of Turkish women and children I ought not to do more at this time than to consult those whom I believe to be profoundly sympathetic toward the silent and helpless portion of the Turkish Nation.

I shall not cease inquiry as to how to make a more satisfactory reply to your letter. In the meantime will you not let us know how you believe women here can best help you. Beyond the issues of the hour, I am sure that our women earnestly desire to gain a better understanding with the women of the Near East, whose lives have been cast in a different [mold] but who have in common with Western women the aspiration that their children may have a future of free and peaceful progress.

With earnest desire to be of use, I am 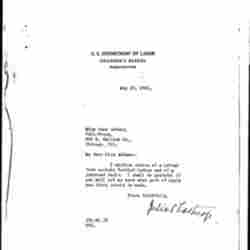 Lathrop tells Riza that she sympathizes with the plight of Armenians in Turkey.