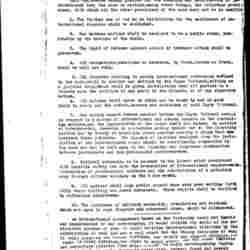 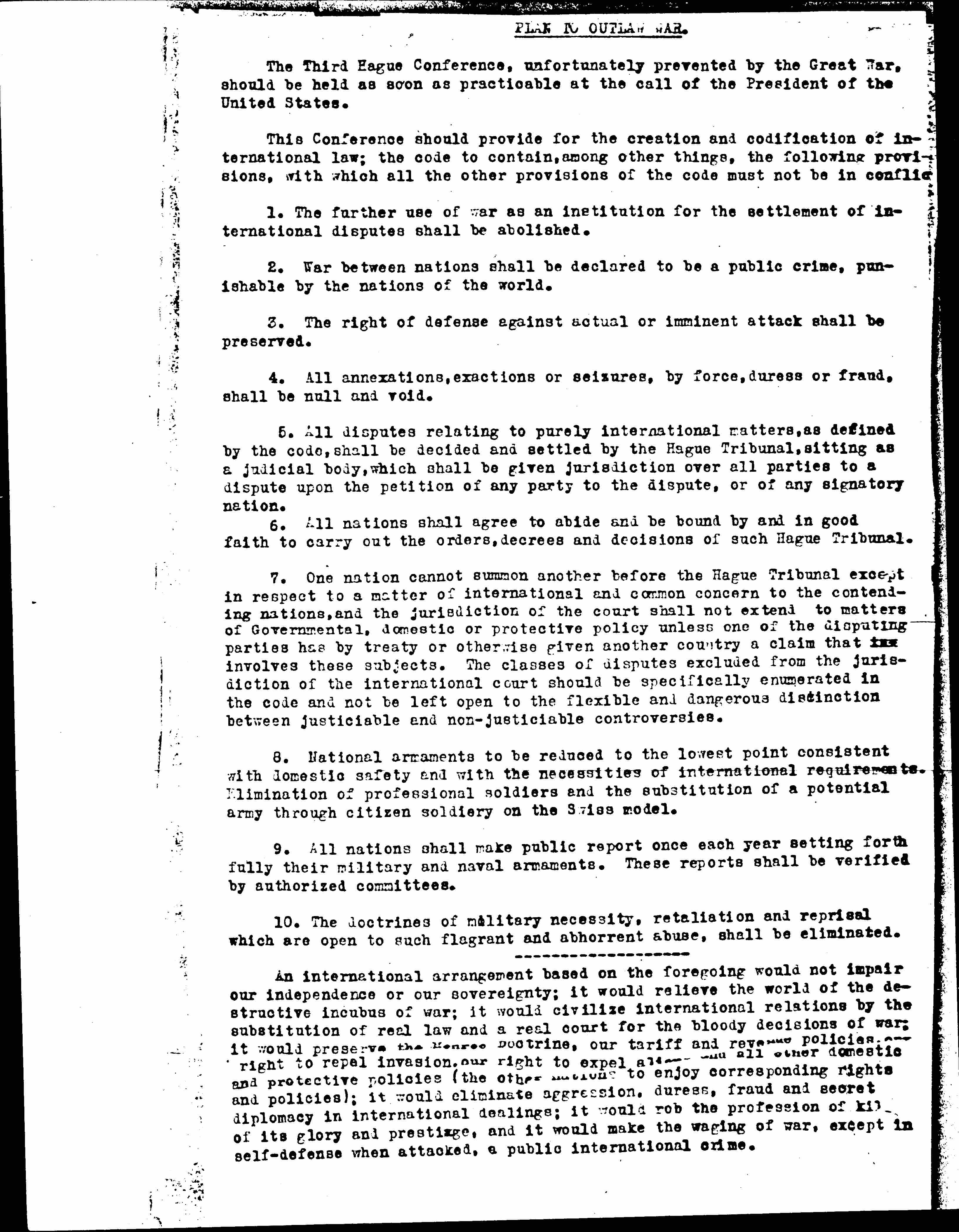 The Third Hague Conference, unfortunately prevented by the Great War, should be held as soon as practicable at the call of the President of the United States.

This Conference should provide for the creation and codification of international law; the code to contain, among other things, the following provisions, with which all the other provisions of the code must not be in [conflict.]

1. The further use of war as an institution for the settlement of international disputes shall be abolished.

2. War between nations shall be declared to be a public crime, punishable by the nations of the world.

3. The right of defense against actual or imminent attack shall be preserved.

4. All annexations, exactions or seizures, by force, duress or fraud, shall be null and void.

5. All disputes relating to purely international matters, as defined by the code, shall be decided and settled by The Hague Tribunal, sitting as a judicial body, which shall be given jurisdiction over all parties to a dispute upon the petition of any party to the dispute, or of any signatory nation.

6. All nations shall agree to abide and be bound by and in good faith to carry out the orders, decrees and decisions of such Hague Tribunal.

7. One nation cannot summon another before The Hague Tribunal except in respect to a matter of international and common concern to the contending nations, and the jurisdiction of the court shall not extend to matters of Governmental, domestic or protective policy unless one of the disputing parties has by treaty or otherwise given another country a claim that involves these subjects. The classes of disputes excluded from the jurisdiction of the international court should be specifically enumerated in the code and not be left open to the flexible and dangerous distinction between justiciable and non-justiciable controversies.

8. National armaments to be released to the lowest point consistent with domestic safety and with the necessities of international requirements. Elimination of professional soldiers and the substitution of a potential army through citizen soldiery on the Swiss model.

9. All nations shall make public report once each year setting forth fully their military and naval armaments. These reports shall be verified by authorized committees.

10. The doctrines of military necessity, retaliation and reprisal which are open to such flagrant and abhorrent abuse, shall be eliminated.

An international arrangement based on the foregoing would not impair our independence or our sovereignty; it would relieve the world of the destructive incubus of war; it would civilize international relations by the substitution of real law and a real court for the bloody decisions of war; it would preserve the Monroe Doctrine, our tariff and revenue policies [and] right to repel invasion, our right to expel [aliens and] all other domestic and protective policies (the other nations to enjoy corresponding rights and policies); it would eliminate aggression, duress, fraud and secret diplomacy in international dealings; it would rob the profession of [killing] of its glory and prestige, and it would make the waging of war, except in self-defense when attacked, a public international crime. 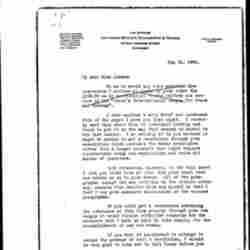 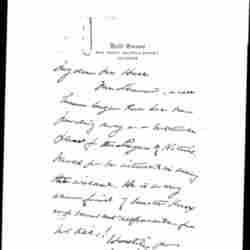 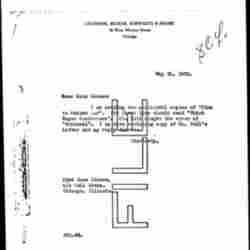 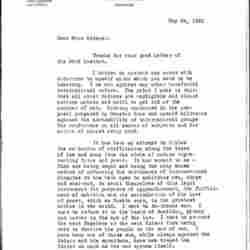 Levinson summarizes his and Knox's plans to outlaw war.