The Position of the American Civil Liberties Union on the Issues in the United States Today, May, 1920 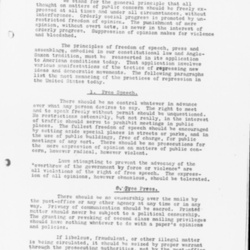 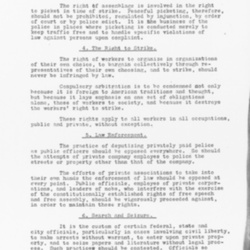 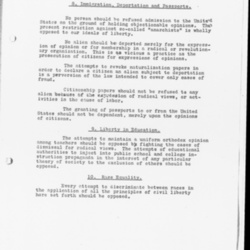 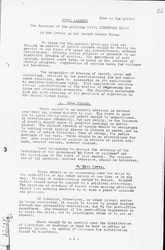 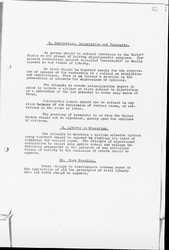 (Now on the press)

CIVIL LIBERTY
The Position of the AMERICAN CIVIL LIBERTIES UNION on the Issues in the United States Today.

We stand for the general principle that all thought on matters of public concern should be freely expressed at all times and under all circumstances, without interference. Orderly social progress is promoted by unrestricted freedom of opinion. The punishment of mere opinion, without overt acts, is never in the interest of orderly progress. Suppression of opinion makes for violence and bloodshed.

The principles of freedom of speech, press and assemblage, embodied in our constitutional law and Anglo-Saxon tradition, must be reasserted in its application to American conditions today. That application involves various manifestations of the tactics of repressing new ideas and democratic movements. The following paragraphs list the most menacing of the practices of repression in the United States today.

There should be no control whatever in advance over what any person desires to say. The right to meet and to speak freely without permit should be unquestioned. No restrictions ostensibly, but not really, in the interest of traffic should serve to prohibit meetings in public places. The fullest freedom of speech should be encouraged by setting aside special places in streets or parks, and in the use of public buildings, free of charge, for public meeting of any sort. There should be no prosecutions for the mere expression of opinion on matters of public concern, however radical, however violent.

Laws attempting to prevent the advocacy of the "overthrow of the government by force or violence" are all violations of the right of free speech. The expression of all opinions, however obnoxious, should be tolerated.

There should be no censorship over the mails by the post-office or any other agency at any time or in any way. Privacy of communication should by sacred. Printed matter should never be subject to a political censorship. The granting or revoking of second class mailing privileges should have nothing whatever to do with a paper's opinions and policies.

There should be no control over the distribution of literature at meetings or hand to hand in public or private places. No system of licenses for distribution should be tolerated. [page 2]

Meetings in public places, parades and processions should be freely permitted, the only reasonable regulation being the notification of the police in advance of time and place. No discretion should be given the police to prohibit parades or processions, subject to the imperative demands of traffic in crowded cities. There should be no laws or regulations prohibiting the display of red flags or other political emblems.

The right of assemblage is involved in the right to picket in time of strike. Peaceful picketing, therefore, should not be prohibited, regulated by injunction, by order of court or by police edict. It is the business of the police in places where picketing is conducted merely to keep traffic free and to handle specific violations of law against persons upon complaint.

Compulsory arbitration is to be condemned not only because it is foreign to American traditions and thought, but because it lays emphasis on one set of obligations alone, those of workers to society, and because it destroys the workers' right to strike.

These rights apply to all workers in all occupations, public and private, without exception.

The practice of deputizing privately paid police as public officers should be opposed everywhere. So should the attempts of private company [employees] to police the streets or property other than that of the company.

The efforts of private associations to take into their own hands the enforcement of law should be opposed at every point. Public officials, [employees] of private corporations, and leaders of mobs, who interfere with the exercise of the constitutionally established rights of free speech and free assembly, should be vigorously proceeded against, in order to maintain these rights.

It is the custom of certain federal, state and city officials, particularly in cases involving civil liberty, to make arrests without warrant, to enter upon private property, and to seize papers and literature without legal process. Such practices should be contested. Officials so violating constitutional guarantees should be proceeded against.

Every person charged with an offense should have the fullest opportunity for a fair trial, for securing counsel and bail in a reasonable sum. In the case of a poor person, special aid should be organized to secure a fair trial, and when necessary, an appeal. The legal profession should be alert to defend cases involving civil liberty. The resolutions of various associations of lawyers against taking cases of radicals are wholly against the traditions of American liberty. [page 3]

No person should be refused admission to the United States on the ground of holding objectionable opinions. The present restriction against so-called "anarchists" is wholly opposed to our ideals of liberty.

No alien should be deported merely for the expression of opinion or for membership in a radical or revolutionary organization. This is as vicious a practice as the prosecution of citizens for expressions of opinions.

The attempts to revoke naturalization papers in order to declare a citizen an alien subject to deportation is a perversion of the law intended to cover only cases of fraud.

Citizenship papers should not be refused to any alien because of the expression of radical views, or activities in the cause of labor.

The granting of passports to or from the United States should not be dependent, merely upon the opinions of citizens.

Every attempt to discriminate between races in the application of all the principles of civil liberty here set forth should be opposed.

A poor image has been replaced by a new scan from Princeton University.