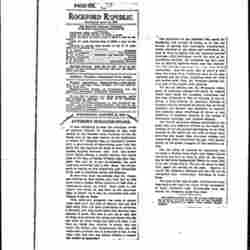 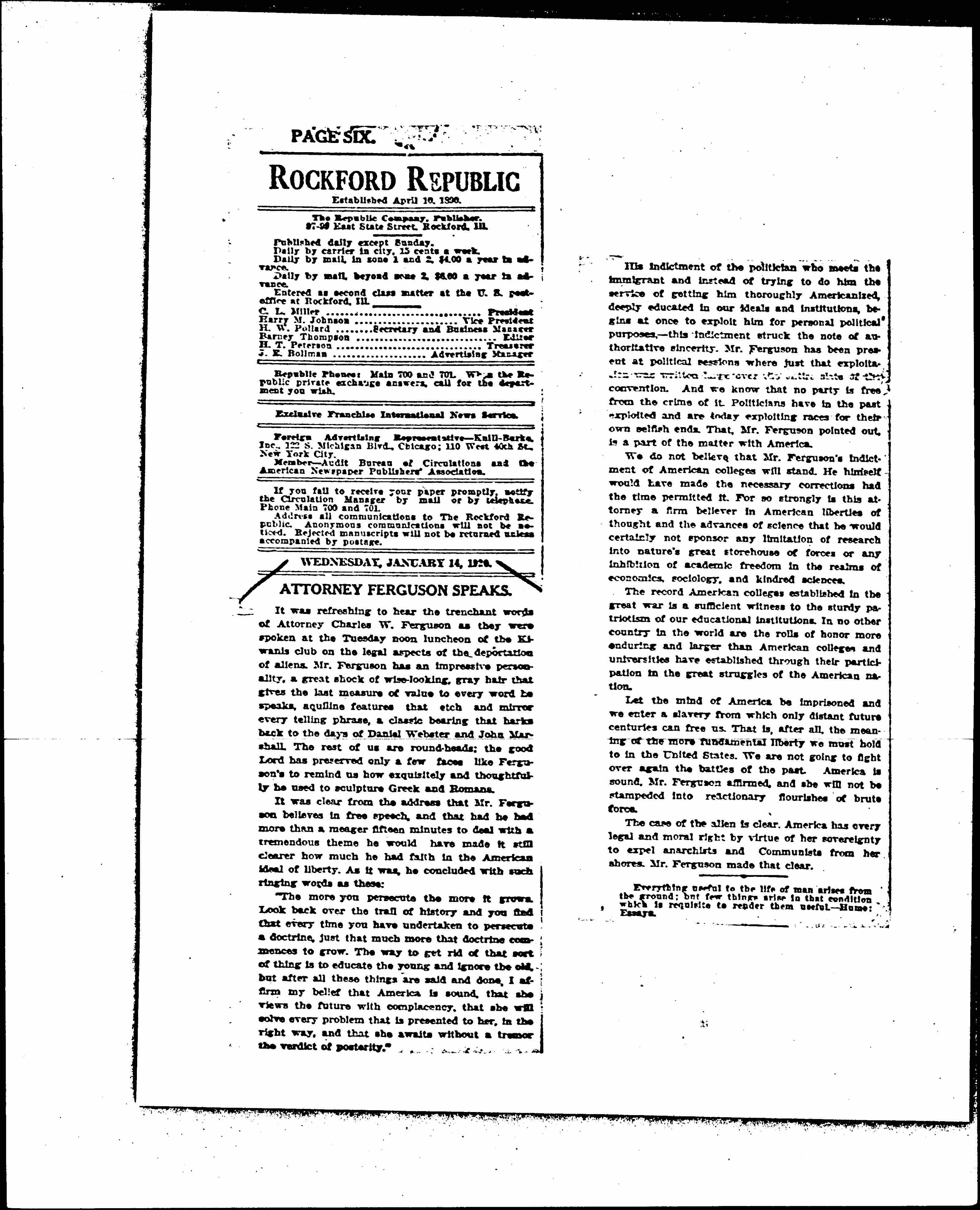 It was refreshing to hear the trenchant words of Attorney Charles W. Ferguson as they were spoken at the Tuesday noon luncheon of the Kiwanis Club on the legal aspects of the deportation of aliens. Mr. Ferguson has an impressive personality, a great shock of wise-looking, gray hair that gives the last measure of value to every word he speaks, aquiline features that etch and mirror every telling phrase, a classic bearing that harks back to the days of Daniel Webster and John Marshall. The rest of us are round-heads: the good Lord has preserved only a few faces like Ferguson's to remind us how exquisitely and thoughtfully he used to sculpture Greek and Romans.

It was clear from the address that Mr. Ferguson believes in free speech, and that had he had more than a meager fifteen minutes to deal with a tremendous theme he would have made it still clearer how much he had faith in the American ideal of liberty. As it was, he concluded with such ringing words as these:

"The more you persecute the more it grows. Look back over the trail of history and you find that every time you have undertaken to persecute a doctrine, just that much more that doctrine commences to grow. The way to get rid of that sort of thing is to educate the young and ignore the old, but after all these things are said and done, I affirm my belief that America is sound, that she views the future with complacency, that she will solve every problem that is presented to her, in the right way, and that she awaits without a tremor the verdict of posterity."

His indictment of the politician who meets the immigrant and instead of trying to do him the service of getting him thoroughly Americanized, deeply educated in our ideals and institutions, begins at once to exploit him for personal political purposes -- this indictment struck the note of authoritative sincerity. Mr. Ferguson has been present at political sessions where just that exploitation was written [large] over [the entire slate] of [that] convention. And we know that no party is free from the crime of it. Politicians have in the past exploited and are today exploiting races for their own selfish ends. That, Mr. Ferguson pointed out, is a part of the matter with America.

We do not believe that Mr. Ferguson's indictment of American colleges will stand. He himself would have made the necessary corrections had the time permitted it. For so strongly is this attorney a firm believer in American liberties of thought and the advances of science that he would certainly not sponsor any limitation of research into nature's great storehouse of forces or any inhibition of academic freedom in the realms of economics, sociology, and kindred sciences.

Let the mind of America be imprisoned and we enter a slavery from which only distant future centuries can free us. That is, after all, the meaning of the more fundamental liberty we must hold to in the United States. We are not going to fight over again the battles of the past. America is sound, Mr. Ferguson affirmed, and she will not be stampeded into reactionary flourishes of brute force.

The case of the alien is clear. America has every legal and moral right by virtue of her sovereignty to expel anarchists and Communists from her shores. Mr. Ferguson made that clear. 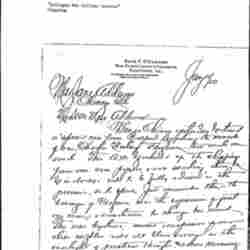 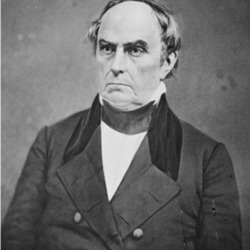 An editorial supports most of Charles Ferguson's takes on radicalism, but does not support his idea that colleges promote radicalism.