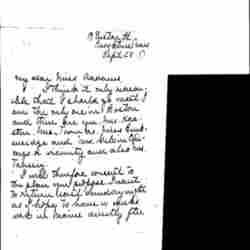 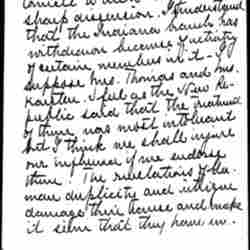 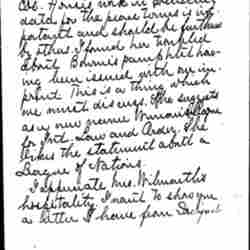 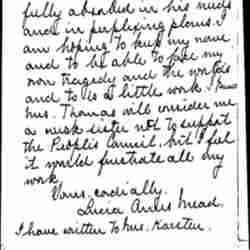 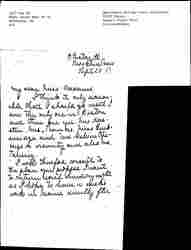 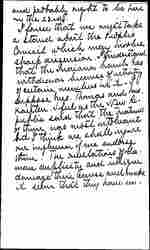 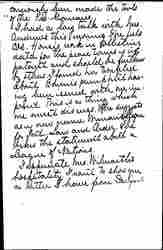 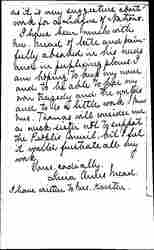 I think it only reasonable that I should go west. I am the only one in Boston and there are you, Mrs. Karsten, Mrs. Thomas, Miss [Breckinridge] and Mrs. Gale in Chicago or vicinity and also Mrs. Taussig.

I will therefore consent to the plan you propose. I want to return east Sunday night as I hope to have a week's work in Maine directly after [page 2] and probably ought to be here on the 23rd.

I foresee that we must take a stand about the People's Council which may involve sharp dissension. I understand that the Indiana branch has withdrawn because of activity of certain members in it -- I suppose Mrs. Thomas and Mrs. Karsten. I feel as the New Republic said that the treatment of them was most intolerant but I think we shall injure our influence if we endorse them. The revelations of German duplicity and intrigue damage their cause and make it seem that they have [unconsciously] [page 3] been made the tools of the Pro-Germans.

I had a long talk with Mrs. Andrews this morning. She feels Col. House's work in collecting data for the peace terms is important and should be furthered by others. I found her troubled about Bourne's pamphlet having been issued with our imprint. This is a thing which we must discuss. She suggests as a new name Woman's League for Int. Law and Order. She likes the statement about a League of Nations.

I appreciate Mrs. Wilmarth's hospitality. I want to show you a letter I have from Dr Lynch [page 4] as it is very suggestive about work for a League of Nations.

I have been much with Mr. Mead of late and painfully absorbed in his needs and in perplexing plans. I am hoping to keep my nerve and to be able to face my own tragedy and the world's and to do a little work. I know Mrs. Thomas will consider me a weak sister not to support the People's Council, but I feel it would frustrate all my work.

I have written to Mrs. Karsten.

Mead consents to Addams's plan and desires to travel west to join those working near Chicago.