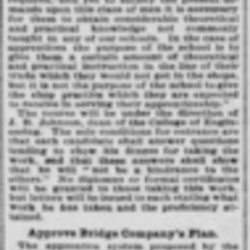 WILL FIT BOYS FOR TRADES

SUMMER SCHOOL FOR APPRENTICES TO BE CONDUCTED.

The University of Wisconsin has determined on a novel departure from the established methods of industrial schools and will devote attention to educating scholars for apprenticeships in the various fields of engineering. To this end the College of Engineering of the university will conduct a "summer school for apprentices" this year. Its shops, laboratories, and a portion of its teaching force will be devoted for six weeks during the summer vacation to such forms of industrial education as are essential to preparing aspirants to the apprentice ranks for practical and skillful work. This is held to be an entirely new departure on the part of colleges of engineering, and already has met with great favor throughout the State of Wisconsin.

"This school," according to the terms of the prospectus issued, "has been established for the benefit of machinists, carpenters, or sheet metal workers; stationary, marine, or locomotive engineers; shop foremen and superintendents; superintendents of water works, electric light plants, power stations, factories, large office and store buildings in cities; and for the young men who wish to qualify themselves for such positions. For these employments the full four years' professional courses in engineering are not required, and yet to satisfy the present demands upon this class of men it is necessary for them to obtain considerable theoretical and practical knowledge not commonly taught in any of our schools. In the case of apprentices the purpose of the school is to give them a certain amount of theoretical and practical instruction in the line of their trade which they would not get in the shops, but it is not the purpose of the school to give the shop practice which they are expected to receive in serving their apprenticeship."

The course will be under the direction of J. B. Johnson, dean of the College of Engineering. The sole conditions for entrance are that each candidate shall answer questions tending to show his fitness for taking the work, and that these answers shall show that he will "not be a hindrance to the others." No diplomas or formal certificates will be granted to those taking this work, but letters will be issued to each stating what work he has taken and the proficiency attained.

The apprentice system proposed by the American Bridge company of New Jersey, which has Western branch offices in Chicago, attracted much attention among manufacturers and business-men in Chicago yesterday. They saw in it a tendency to give promising boys better opportunities to rise in life. The system closely follows the lines of the English apprenticeships, with the exception that it provides for a bonus of 50 cents for each week during the four years, and an annual increase of $1 in pay.

"While we have no direct advices regarding the proposed system," said August Ziesing, Western manager of the American Bridge company, "we understand that such a proposition is under discussion. The main opportunities in this company are for draftsmen and engineers, and the young man of ability and energy has an excellent opportunity to succeed. His apprenticeship with a big company is an education."

"Such a system of apprenticeship as proposed by the American Bridge company," said Manager Walker of the Illinois Steel company, "meets with my hearty [endorsement]. The great manufacturing institutions of the country are finding out that it is mutually beneficial to educate their [employees] up to their needs and requirements."

"We are today carrying out an apprentice system under a four-year contract," said an official of Fraser & Chalmers, "and it works well. The minimum rate for beginners is $4, but it depends largely on what department is entered. There is a yearly advance and a bonus paid at the termination of the service."

"In my opinion the whole apprenticeship system needs revision," said Miss Jane Addams of Hull House. "The ordinary apprenticeship binding a boy to any trade for a number of years may prove detrimental, for what he might earn an honest living at today becomes obsolete before his contract is ended. While there might be trades where apprenticeships would be advisable, it would take a great deal of judgment in picking them out. I would not like to pass on the plan of the American Bridge company without first knowing about it."

"From a sociological point in this city," said Professor Graham Taylor," apprenticeships have not been well thought of where they are in contract form."

Addams argues that the proposed apprenticeship system needs to be remodeled before it will be effective.