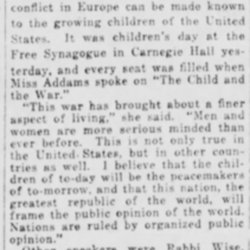 War will be impossible in the future, says Jane Addams, if the lessons of the conflict in Europe can be made known to the growing children of the United States. It was children's day at the Free Synagogue in Carnegie Hall yesterday, and every seat was filled when Miss Addams spoke on "The Child and the War."

"This war has brought about a finer aspect of living," she said. "Men and women are more serious minded than ever before. This is not only true in the United States, but in other countries as well. I believe that the children of [today] will be the peacemakers of [tomorrow], and that this nation, the greatest republic of the world, will frame the public opinion of the world. Nations are ruled by organized public opinion."

Other speakers were Rabbi Wise, Adolph Lewisohn and Owen R. Lovejoy, of the National Child Labor Committee. Mr. Lewisohn made a strong plea for support for this committee, and then introduced Mr. Lovejoy.

Mr. Lovejoy said there was one sure way to bring about the abolition of child labor, and that was to have a parade in all the large cities showing the boy and girl of nine or ten years working in mill or factory with sunken chest, skinny bones, haggard look and arrested growth and development. 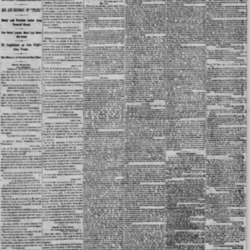 An excerpt from Addams' Children's Day speech at the Free Synagogue at Carnegie Hall.