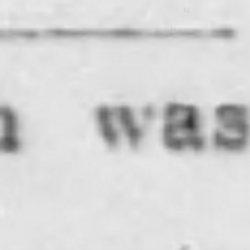 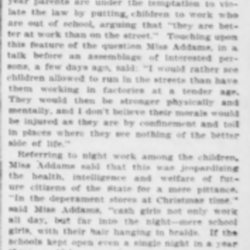 The crusade which was recently begun by [page 2] Miss Jane Addams, of the Hull House Social Settlement, and other philanthropists who are interested in the welfare of the child workers of Chicago, has been taken up by the League of Cook County Women's Clubs. The revelations made by Miss Addams regarding the abuses of the existing Child Labor law by parents and employers has caused a distinct shock to the community. The ineffectiveness of the present Child Labor and School Attendance laws is shown in that the number of children at work in Illinois has more than doubled in the last five years. The Illinois law requires that children between seven and fourteen years of age shall attend school sixteen weeks of each year, of which only twelve need be consecutive. Children under ten years of age must enter in September, but those between ten and fourteen years need not begin until January. During the remaining thirty-six weeks of the year parents are under the temptation to violate the law by putting children to work who are out of school, arguing that "they are better at work than on the street." Touching upon this feature of the question Miss Addams, in a talk before an assemblage of interested persons, a few days ago, said: "I would rather see children allowed to run in the streets than have them working in factories at a tender age. They would then be stronger physically and mentally, and I don't believe their morals would be injured as they are by confinement and toil in places where they see nothing of the better side of life."

Referring to night work among the children, Miss Addams said that this was jeopardizing the health, intelligence and welfare of future citizens of the State for a mere pittance. "In the [department] stores at Christmas time," said Miss Addams, "cash girls not only work all day, but far into the night -- mere school girls, with their hair hanging in braids. If the schools kept open even a single night in a year there would be a cry of protest from every part of the country."

Miss Addams asserted that in Chicago hundreds of fathers and mothers can be found now who are actually living on the earnings of their children, which is contrary to the laws of life and nature and morality. Some of these fathers think they have done their duty and a day's work when they carry their children's lunch to them in the factories at the noon hour.

Miss Addams said it was an old cry in Chicago that the widows must be supported by their children. She told of a mill where 3,500 children are employed, and only sixty-six of them are the children of widows. Miss Addams and her [coworkers] are advocating three special amendments, to be submitted to the legislature at its coming season. These are to require an educational test of children before allowing them to go to work; to make affidavits as to age effective, thus preventing the employment of children under fourteen years old, and to stop night work.

Addams discussed the ills of child labor at a meeting of interested people in Chicago.