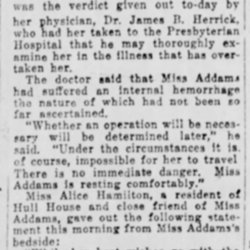 (By Telegraph to The Tribune.)

Chicago, Dec. 1. -- Miss Jane Addams, head of Hull House and the champion of peace, must give up any possible plan to accompany the Ford ship. This was the verdict given out [today] by her physician, Dr. James B. Herrick, who had her taken to the Presbyterian Hospital that he may thoroughly examine her in the illness that has overtaken her.

The doctor said that Miss Addams had suffered an internal hemorrhage the nature of which had not been so far ascertained.

"Whether an operation will be necessary will be determined later," he said. "Under the circumstances it is, of course, impossible for her to travel. There is no immediate danger. Miss Addams is resting comfortably."

Miss Alice Hamilton, a resident of Hull House and close friend of Miss Addams, gave out the following statement this morning from Miss Addams's bedside:

"While her best wishes go with the peace ship, it has been said positively by the doctor that she cannot plan to sail with it. It is even doubtful if she can follow later, as she had hoped to do. That remains to be determined. The doctor is noncommittal about it. She is not dangerously ill, but must have complete rest and must submit to the most careful examination. An X-ray photo will be made."

Addams is advised not to participate in the Ford Peace Ship due to poor health.