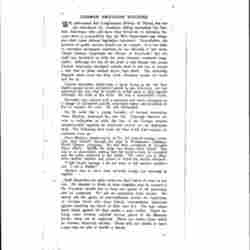 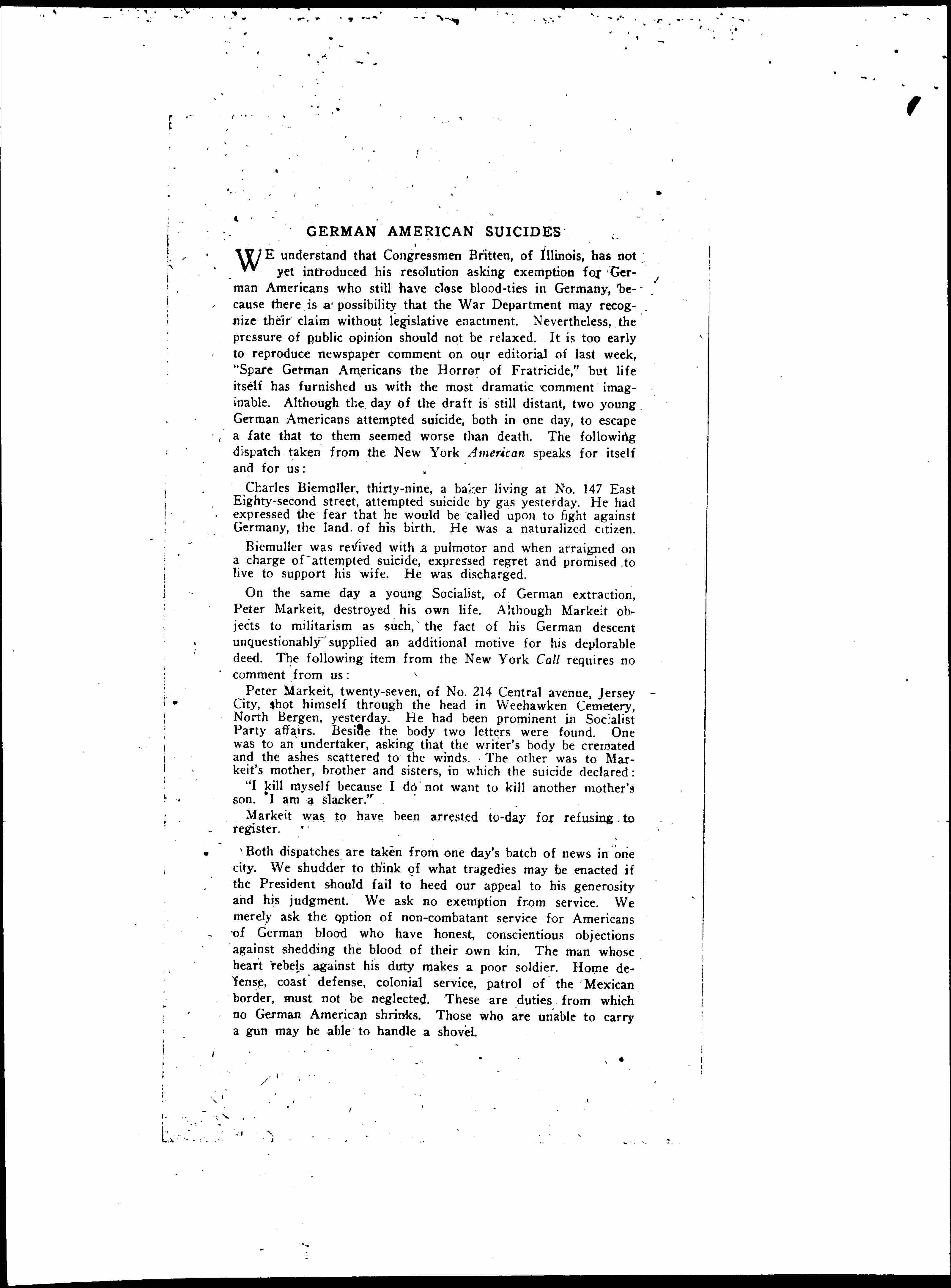 WE understand that Congressmen Britten, of Illinois, has not yet introduced his resolution asking exemption for German Americans who still have close blood-ties in Germany, because there is a possibility that the War Department may recognize their claim without legislative enactment. Nevertheless, the pressure of public opinion should not be relaxed. It is too early to reproduce newspaper comment on our editorial of last week, "Spare German Americans the Horror of Fratricide," but life itself has furnished us with the most dramatic comment imaginable. Although the day of the draft is still distant, two young German Americans attempted suicide, both in one day, to escape a fate that to them seemed worse than death. The following dispatch taken from the New York American speaks for itself and for us:

Charles Biemuller, thirty-nine, a baker living at No. 147 East Eighty-Second Street, attempted suicide by gas yesterday. He had expressed the fear that he would be called upon to fight against Germany, the land of his birth. He was a naturalized citizen.

Biemuller was revived with a pulmotor and when arraigned on a charge of attempted suicide, expressed regret and promised to live to support his wife. He was discharged.

On the same day a young Socialist, of German extraction, Peter Markeit, destroyed his own life. Although Markeit objects to militarism as such, the fact of his German decent unquestionably supplied an additional motive for his deplorable deed. The following item from the New York Call requires no comment from us:

Peter Markeit, twenty-seven, of No. 214 Central Avenue, Jersey City, shot himself through the head in Weehawken Cemetery, North Bergen, yesterday. He had been prominent in Socialist Party affairs. Beside the body two letters were found. One was to an undertaker, asking that the writer's body be cremated and the ashes scattered to the winds. The other was to Markeit's mother, brother and sisters, in which the suicide declared:

"I kill myself because I do not want to kill another mother's son. I am a slacker."

Markeit was to have been arrested [today] for refusing to register.

Both dispatches are taken from one day's batch of news in one city. We shudder to think of what tragedies may be enacted if the President should fail to heed our appeal to his generosity and his judgment. We ask no exemption from service. We merely ask the option of non-combatant service for Americans of German blood who have honest, conscientious objections against shedding the blood of their own kin. The man whose heart rebels against his duty makes a poor soldier. Home defense, coast defense, colonial service, patrol of the Mexican border, must not be neglected. These are duties from which no German American shrinks. Those who are unable to carry a gun may be able to handle a shovel.

In discussing two German Americans attempt suicide to avoid the draft and fighting against their native country of Germany, Viereck's argues for alternate ways for German-Americans to serve their country.

The editorial, "Spare German Americans the Horror of Fratricide," mentioned in the article can be found here on page 334.
This document can also be found here.