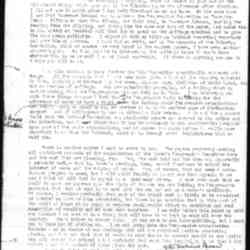 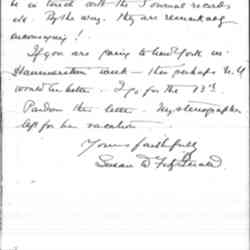 I am enclosing a clipping, which of course is just one of the old absurd things which came out in the Columbus paper the afternoon after election. I did not see it until after I had left Cleveland on my way home. At the same time I saw that Governor Johnson was to address the Progressive Convention on Thursday. I sent a fifty-word wire from Albany, our first stop, to Governor Johnson, quoting the heading from the clipping, and giving him the name and date of the paper, and asked him in his speech at Memorial Hall that day to speak on the suffrage question and to give the same press publicity. I signed it with my title as National recording Secretary and gave him my address. I have had no reply, and in the accounts of the Columbus Convention, which of course are very brief in the eastern papers, I have seen nothing concerning it. As I am told he is lukewarm on the suffrage issue (I don't know whether this is so or not) I am at least wondering. If there is anything you can do I hope you will do it.

I am also anxious to know whether the Ohio Convention specifically endorsed suffrage. All the accounts that I have seen have given a list of the measures endorsed by them, including eight-hour day for women, minimum wage, abolition of child labor, etc but no mention of suffrage. You are undoubtedly aware, too, of a feeling which is rather strong, that the Progressives did not help us in Ohio. I am bothering you with these things because I feel that <as> the Progressive Party is asking for the adherence of women we have a right where <to know whether> the various state progressive organizations are really going to stand by us, or whether it is to be another case of perfunctory support and of willingness to use us without a fair return. I do not for a moment doubt that the National Convention was absolutely square and earnest in its action and its intention, but I must think that it may be necessary to put considerable pressure upon some of the state organizations, and of course the state action is really more important to us than the National, since it is through state legislatures that we must win.

There is another matter I want to refer to you. The papers yesterday morning all contained accounts of the organization of the Women's Progressive Committee here and the work they are planning, etc. Now, the work laid out for them was apparently a separate work,--that is, women's meetings, teas, social functions to enlist the interest of women and the raising of money. Now, of course, that may seem a satisfactory program to some, but I will admit frankly it is not one that appeals to me and I think it will fail to appeal to a good many others. I wish very much that we could in some way impress upon the minds of the men who are leading the Progressive movement that what we want is to work with the men and not as a woman's auxiliary. Of course, I realize perfectly that much of the detail work is likely to be organized or carried on more or less separately, but there is no question that in this part of the world at least it is going to require considerable effort to establish any real assumption of equality and of work done together. I am only taking this point up with you because I am sure it is a thing that will have to be kept in mind all over the country. Don't bother to answer this. It may seem to you hair-splitting, but I want you to know how it strikes me. I am not going into the Progressive organization because I am in charge of our dealings with all the political parties concerning planks, and I do not feel that it would be wise for me to connect myself in any public way with one of the parties; but I certainly feel much less tempted to do so than I did before I saw the account of their plans for work.

Do you not think it would be well to call a meeting <of the National Board> in Boston to consider the financial situation. With you, Miss Breckinridge [page 2] all in New England & Miss Shaw not available anyway it seemed to me a good idea. The more so as we should be in touch with the Journal records etc. By the way, they are remarkably encouraging!

If you are going to New York [in] Hammerstein week -- then perhaps N.Y. would be better. I go for the 13th.

Pardon this letter, my stenographer left for her vacation. 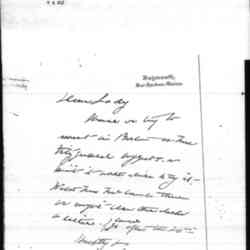 FitzGerald advises Addams to help her organize better efforts to focus on the issue of suffrage.