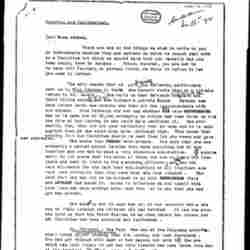 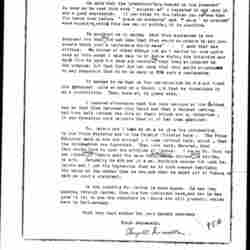 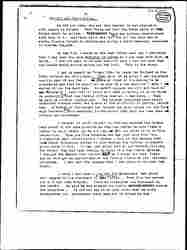 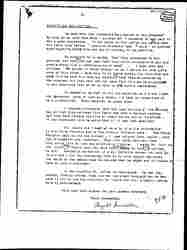 There are one or two things we wish to write to you as individuals because they are matters on which we cannot deal with as a Committee but which we should have told you verbally had you been coming here in January. Since, however, you are not to be here till February, or perhaps later, we think it better to let you know by letter.

The only reason that we give <privately> the following particulars sent us by Miss  [Hobhouse] is that she herself wrote them in a private letter to Dr. Jacobs. She tells us that the French women <i.e. our Committee there> have had their Office raided <by the police> and Mme Duchêne’s private house. Several men came before seven one morning and took all the correspondence with our bureau. Miss Hobhouse did not say whether [illegible] <any> case [illegible] was to be made out of it, but evidently no action had been taken up to the time of her leaving or she would have mentioned it. And evidently, too, they did not know definitely that no case was to be made against them as she would also have mentioned that. They asked that nothing from our Committee [should] be sent them for six weeks and gave new addresses.

She wrote from [illegible] Switzerland. She said that she was evidently a marked person because they were expecting her at the frontier and she had to pass a very rigorous examination. She apparently is not aware that the names of those who are to cross the frontiers are sent in lists to the examining officers; and <she> has not made allowance for the fact that examinations at all frontiers are much more stringent than they were when she last crossed. She said that she was not to be allowed to go into [illegible] Italy and [illegible] had asked Dr. Jacobs to intercede on her behalf with Lord Loreburn when another note came from her to say that she had got her permit.

She asked us not to send her any of our material while she was in Italy because she believed she was watched. It was she also who told us that the third Italian woman whom Genoni had chosen for our Committee had been arrested and imprisoned.

Dr. [Golińska], the Pole who was at the Congress, unfortunately turned up, <last week in Amsterdam> not knowing that the meeting had been postponed. She had got through with most of her papers but said that the one which was most likely to get her into trouble had been taken from her at the frontier. <She therefore returned by another route.> [page 2]

We did not think she was very neutral in her proposals with regard to Poland. Most Poles ask that the three parts of [illegible] Poland shall be united. [illegible] There was nothing inconsistent with this in the manifesto which she left <here> but all her talk was of adding Russian Poland to Galicia and making a third monarchy attached to Austria Hungary.

In the P.S. I added to the last letter sent you I mentioned that I had seen the same Minister in London as I had seen with Miss Balch. I did not want to be more explicit when I did not know that the letter would arrive before you had left. This is the story.

I got my permit on Friday 19th. to leave for Holland on the 20th. without any difficulty. They gave it me after I had explained exactly what it was for. He <The clerk> spoke at first of its having to be considered and that he would let me know in a few days; but I said I wanted it for the next day. He said: “I suppose you will not take no.” and Naturally I said that it would only mean my having to go to those in authority <and> that the Foreign Office knew all I was doing. Then he gave it without further ado. The British Committee were rather surprised because every one speaks of the difficulty of getting permits now. A Member of Parliament was refused one just before but the Foreign Secretary <later> said something to the effect that this had been done without his knowledge.

I thought it would be well to find out whether the Government stood in the same position as they had stated in Lord Crewe’s letter to me, of which you have a copy. You can refer to it in this connection. Then, too, Miss Hobhouse, who had just come over from Holland, but whom unfortunately I missed, brought the message that the Dutch Government wished to know whether the British Government stood where it did. It was just after four of our Cabinet, including Sir Edward Grey, had been meeting in Paris with the French Cabinet. I thought Sir Edward Grey was not [illegible] <back> so I asked for Lord Crewe and at once got an appointment at the Foreign Office on the Saturday afternoon. I had left the message that I was going to Holland that night.

He said that the Government “acquiesced in the proposal.” As soon as he used this word "acquiesced” I repeated it and said it was a good expression. If you refer to the letter you will see that the terms used before “place no obstacle” and make “no protest” were negative, while this new way of putting it is positive.

It seemed to me that in the conversation he did not treat the proposal quite so much as a theory but that he [visualized] it as a possibility. That, however, is guess work.

I learned afterwards that the four members of the Cabinet had at that time returned from Paris and that a Cabinet meeting had been held between the time of their return and my interview. It was therefore more valuable than if it had been earlier.

Dr. Jacobs and I went at once to give the information to the Prime Minister and to the Foreign Minister here. The Prime Minister said on his own account, I mean without being asking, that the information was important. They both said, however, that they would like to know the attitude of France. I asked Mr. Cort [van der] Linden <whether> if France said the same thing <as Britain> would Holland <would> be willing to act. Naturally he did not give any definite answer but both Dr. Jacobs and I got the impression that he is much nearer [realizing] the value of the method than he was, and that he might act if France made as good a statement.

In the meantime Mr. Battin is here again. He saw Grey passing through London, then the two ministers here, and now he has gone to try to see the ministers in France and will probably return here by Switzerland.

With very best wishes for your speedy recovery
Your sincerely, 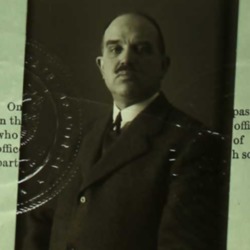 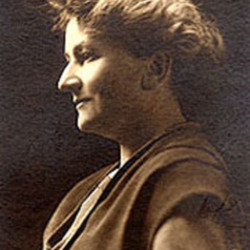 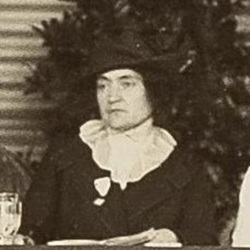 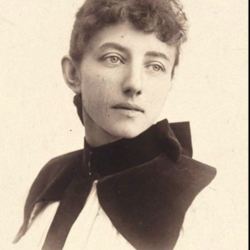 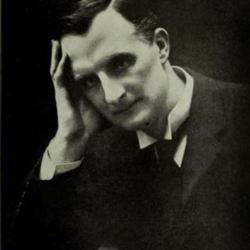 Macmillan tells Addams that the French government is raiding the offices and homes of peace activists and updates her on the English Government's stance on peace negotiations.

At the bottom of the third page, someone, perhaps Macmillan, wrote: "P.T.Q."