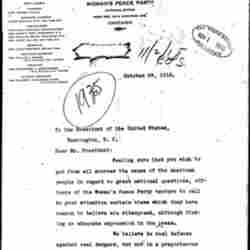 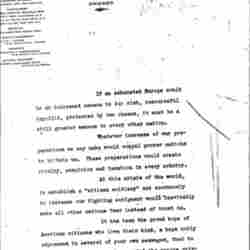 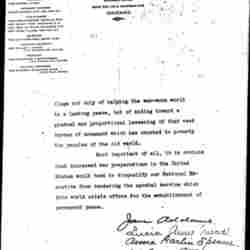 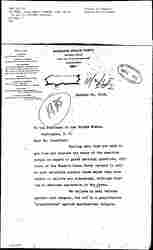 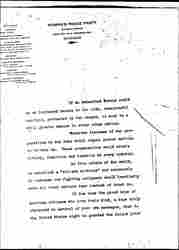 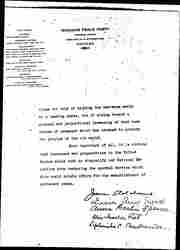 To the President of the United States,
Washington, D.C.

Feeling sure that you wish to get from all sources the sense of the American people in regard to great national questions, officers of the Woman's Peace Party venture to call to your attention certain views which they have reason to believe are widespread, although finding no adequate expression in the press.

We believe in real defense against real dangers, but not in a preposterous "preparedness" against hypothetical dangers. [page 2]

If an exhausted Europe could be an increased menace to our rich, resourceful republic, protected by two oceans, it must be a still greater menace to every other nation.

Whatever increase of war preparations we may make would compel poorer nations to imitate us. These preparations would create rivalry, suspicion and taxation in every country.

At this crisis of the world, to establish a "citizen soldiery" and enormously to increase our fighting equipment would inevitably make all other nations fear instead of trust us.

It has been the proud hope of American citizens who love their kind, a hope nobly expressed in several of your own messages, that to the United States might be granted the unique privilege [page 3] not only of helping the war-worn world to a lasting peace, but of aiding toward a gradual and proportional lessening of that vast burden of armament which has crushed to poverty the peoples of the old world.

Most important of all, it is obvious that increased war preparations in the United States would tend to disqualify our National Executive from rendering the epochal service which this world crisis offers for the establishment of permanent peace. 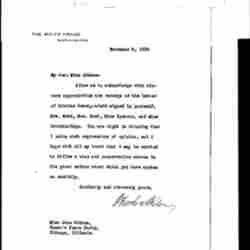 Addams explains to Wilson that making preparations for war, while maintaining neutrality, would damage the United States' international reputation.

At the top right of the first page is the following stamp: "THE WHITE HOUSE NOV 1 1915 RECEIVED"