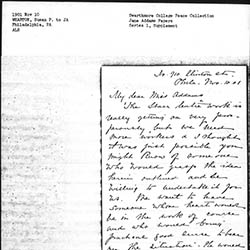 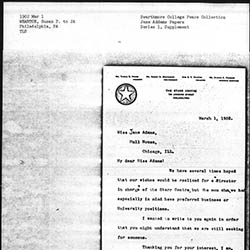 You are missing a key biographical detail - Susan Wharton adopted a young girl named Eleanor. As a single woman, this is pretty significant for the time.

Hi Susan, Thanks for the tip. I will add that to the bio.

Susan Parrish Wharton was a philanthropist who was W. E. B. Du Bois's primary supporter and funder. She graduated from Vassar College in 1884. After graduating, Wharton opened Saint Mary Street Library, a public library for black children. In 1888 she founded a Philadelphia branch of the Octavia Hill Association with her cousin, Helen Parrish. She also opened a cooking school, offered penny lunches to children, and sponsored a kindergarten. Wharton was the first chairperson and president of the Starr Centre Association of Philadelphia, an organization meant to provide education and social improvements to people in Philadelphia's poor neighborhoods. Offered her home to house Starr Centre meetings. Wharton also founded the Wharton Center, the Whittier Centre for the Study and Practical Solution of Negro City Problems, and invited the College Settlement Association to establish a branch in Philadelphia. She was a member of the executive committee of the Philadelphia College Settlement and convinced the provost of the University of Pennsylvania to invite W. E. B. Du Bois to Philadelphia.