Statement to the House Judiciary Committee on the Susan B. Anthony Amendment, December 12, 1916 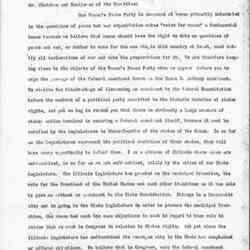 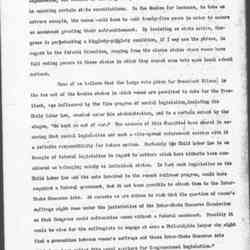 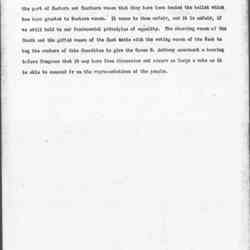 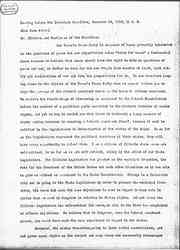 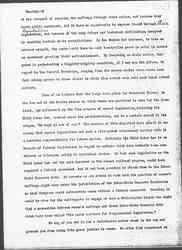 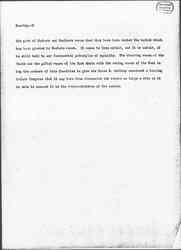 Mr. Chairman and Gentlemen of the Committee:

Our Woman's Peace Party is composed of women primarily interested in the questions of peace but our organization makes "votes for women" a fundamental issue because we believe that women should have the right to vote on questions of peace and war, or rather to vote for the men who, in this country at least, must ratify all declarations of war and vote the preparations for it. We are therefore keeping close to the objects of the Woman's Peace Party when we appear before you to urge the passage of the federal amendment known as the Susan B. Anthony amendment. We realize the disadvantage of discussing an amendment to the federal Constitution before the members of a political party committed to the historic doctrine of states rights, and yet we beg to remind you that there is obviously a large measure of state action involved in securing a federal amendment itself, because it must be ratified by the legislatures in three-fourths of the states of the Union. In so far as the legislatures represent the political doctrines of their states, they will have every opportunity to defend them. I am a citizen of Illinois where women are enfranchised, in so far as we are enfranchised, solely by the action of our State Legislature. The Illinois Legislature has granted us the municipal franchise, the vote for the President of the United States and such other franchises as it was able to give us without an amendment to the State Constitution. Chicago is a Democratic city and in going to the State Legislature in order to procure the municipal franchise, the women had much the same objections to meet in regard to home rule in cities that we meet in Congress in relation to States rights. And yet since the Illinois Legislature has enfranchised its women, no city in the State has complained or offered objections. We believe that in Congress, were the federal amendment passed, you would have much the same experience in regard to the states.

Moreover, the states themselves, owing to their varied constitutions, are not given equal rights on the subject and many women are necessarily discouraged [page 2] at the prospect of securing the suffrage through state action, not because they doubt public sentiment, did it have an opportunity to express itself through <their> legislation <legislatures>, but because of the long delays and technical difficulties involved in amending certain state constitutions. In New Mexico for instance, to take an extreme example, the women would have to wait twenty-five years in order to secure an amendment granting their enfranchisement. By insisting on state action, Congress is perpetuating a [higgledy-piggledy] condition, if I may use the phrase, in regard to the federal franchise, ranging from the eleven states where women have full voting powers to those states in which they cannot even vote upon local school matters.

Some of us believe that the large vote given for President Wilson in the ten out of the twelve states in which women are permitted to vote for the President, was influenced by the fine program of social legislation, including the Child Labor Law, enacted under his administration, and to a certain extent by the slogan, "He kept us out of war." The members of this Committee have shared in securing that social legislation and such a [widespread] endorsement carries with it a definite responsibility for future action. Certainly the Child Labor Law is an example of federal legislation in regard to matters which have hitherto been considered as belonging solely to individual states. In fact such legislation as the Child Labor Law and the acts involved in the recent railroad program, would have required a federal amendment, had it not been possible to attach them to the [Interstate] Commerce Acts. At moments we are driven to wish that the question of woman's suffrage might come under the jurisdiction of the [Interstate] Commerce Commission so that Congress could enfranchise women without a federal amendment. Possibly it would be wise for the suffragists to engage at once a Philadelphia lawyer who might find a connection between woman's suffrage and these [Interstate] Commerce Acts which have been called "the moral carriers for Congressional legislation."

We beg of you not to let a doctrinaire matter stand in the way nor prevent you from doing this great justice to women. We often find resentment on [page 3] the part of Eastern and Southern women that they have been denied the ballot which has been granted to Western women. It seems to them unfair, and it is unfair, if we still hold to our fundamental principles of equality. The charming women of the South and the gifted women of the East unite with the voting women of the West to beg the members of this Committee to give the Susan B. Anthony amendment a hearing before Congress that it may have free discussion and secure as large a vote as it is able to command from the representatives of the people. 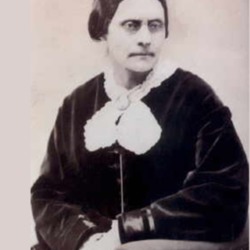 Addams argues that the House should pass the Susan B. Anthony Amendment that would grant women the right to vote.