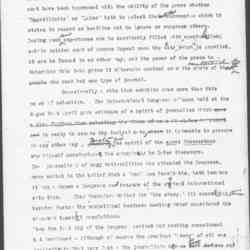 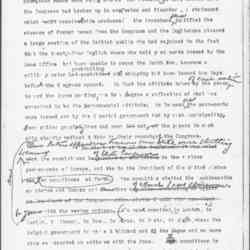 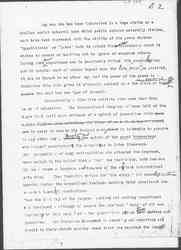 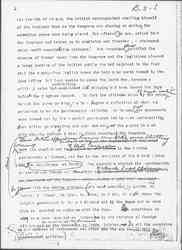 Any one who has been interested in a huge strike or a similar social upheaval upon which public opinion naturally divides, must have been impressed with the ability of the press whether  "[Capitalistic]" or "Labor" both to select the [occurrences] which it wishes to record or headline and to ignore or suppress others. During such <an> experience one is inevitably filled with speculation; public opinion must of course depend upon the data <with> which <it> is provided, it can be formed in no other way, and the power of the press to determine this data gives it [ultimate] control over the minds of [that] <multitude of> people who read but one type of journal.

Occasionally a situation exhibits even more than this power of selection. The International Congress of Women held at The Hague last April gave evidence of a spirit of [journalism] which goes a step further than selecting the items of news it wishes to record and is ready to create the desired news, which it is unable to procure in any other way, quieting <quite in> the spirit of the agent Provocateur who himself manufactures the conspiracy he later discovers. The journalists of many nationalities who attended the Congress, were united in the belief that a "row" was inevitable, both because it was a woman's Congress and because of the strained international situation. They therefore waited for "the story," ill concealing <their> boredom during the unemotional business meeting which considered the somewhat technical resolutions.

When the last day of the Congress arrived and nothing sensational had developed -- although of course the greatest "story" of all was implicit in that very fact -- the journalists became very <both> restive and inventive. Two Frenchmen succeeded in creating and reporting an insult to their absent country women which was reported the length [page 2] and breadth of France; the British correspondent availing himself of the incident that as the Congress was closing at midday, the committee rooms were being [cleared] for afternoon use, cabled that the Congress had broken up in confusion and disorder, a statement which [would] received wide credence. The Frenchman <thus> justified the absence of French women from the Congress and the Englishman pleased a large section of the British public who had rejoiced in the fact that the twenty-four English women who held pass ports issued by the Home Office had been unable to cross the North Sea, because a military order had prohibited <prohibiting> all shipping had been issued two days before the Congress opened. In fact the attitude taken by the press <of each nation> toward the Hague meeting, was to a degree a reflection of what was conceived to be the governmental attitude; in Germany <as> the passports were issued not by the imperial government but by each municipality, some cities granting them and some did not, and the papers in each city clearly reflected this in their reports of the Congress.

<new> On the last day of the Conference it was voted <Our later experiences however were still more startling>. Two committees set forth <to carry> that the resolutions be carried by committee <of the Congress> to the various governments of Europe, and the to the President of the United States. and One committee visited the [Scandinavian] countries and [Russia] and another committee consisting of myself as President of the Congress and Dr. Aletta Jacobs vice president <of which I was chairman> began with the warring nations. (We were received <[illegible words]> in London, in Berlin, in Vienna, in Rome, in Berne, in Paris, in Havre, where the Belgian government is now established and at The Hague and we were also re accorded an audience with the Pope. Each <The> committees in every case were accorded an interview by the minister of foreign affairs and <in most capitals were also received> by the Chancellor or Prime Minister. and In all the countries we saw members of Parliament and other men who are responsible for governmental policies.)

Addams discusses the power that the press has to influence public opinion on World War I.