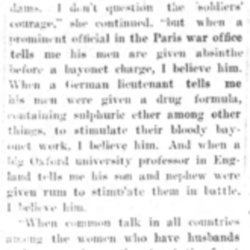 LIQUOR AND DRUGS USED AS STIMULANT FOR BLOODY WORK

Chautauqua, N.Y., Aug. 16. -- Miss Jane Addams, of Chicago, speaking Saturday evening on "Peace" before the Chautauqua assembly, reaffirmed her statement that Europe's soldiers, in some cases, have been stimulated by alcoholics and drugs for the bayonet charges.

"My informants in England, France and Germany were soldiers, officers and well-informed civilians," said Miss Addams. "I don't question the soldiers' courage," she continued, "but when a prominent official in the Paris war office tells me his men are given absinthe before a bayonet charge, I believe him. When a German lieutenant tells me his men were given a drug formula, containing [sulfuric] ether among other things, to stimulate their bloody bayonet work, I believe him. And when a big Oxford university professor in England tells me his son and nephew were given rum to stimulate them in battle, I believe him.

"When common talk in all countries among the women who have husbands and sons and sweethearts at the front tells the same thing I begin to believe that the average soldier is not sufficiently brutish and beastly to fight with cold steel against his brother men unless primed with drugs or strong drink.

"Every nation sincerely believes it is fighting for self-protection for righteousness," declared Miss Addams. "Each will hold out to the end of its strength unless some neutral power offers effective intervention. Everywhere civilians are dominated by militarists. America must lead the fight for peace and disarmament. No European country can solve the riddle and the muddle." 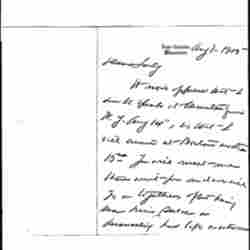 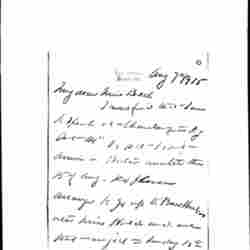 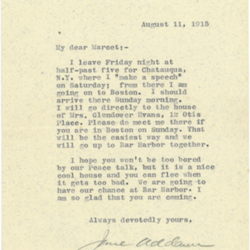 Addams discusses her claim that European soldiers are given alcohol and drugs before being asked to charge. The speech was given to the Chautauqua Assembly.