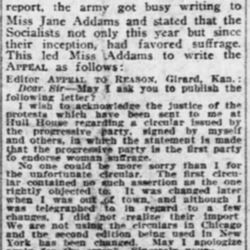 THE ARMY GETS BUSY.

While in the west Fred D. Warren came upon some circulars being distributed by the progressive party in which it was stated over the signature of Miss Jane Addams, of Hull house, that the progressives were the only party that had declared for women's suffrage. Warren telegraphed a denial of this report, the army got busy writing to Miss Jane Addams and stated that the Socialists not only this year but since their inception, had favored suffrage. This led Miss Addams to write the APPEAL as follows:

Dear Sir -- May I ask you to publish the following letter?

I wish to acknowledge the justice of the protests which have been sent to me at Hull House regarding a circular issued by the progressive party, signed by myself and others, in which the statement is made that the progressive party is the first party to endorse woman suffrage.

No one could be more sorry than I for the unfortunate circular. The first circular contained no such assertion as the one rightly objected to. It was changed later when I was out of town, and although I was telegraphed to in regard to a few changes, I did not realize their import We are not using the circulars in Chicago and the second edition being used in New York has been changed. May I apologize again for the error?

It will be noticed that Miss Addams does not say the lying circulars were destroyed, they were merely not distributed in Chicago. If the progressives the first year of their organization are ready to resort to downright lying in order to curry favor with a portion of the electorate, what may you expect of them if they should get into power? 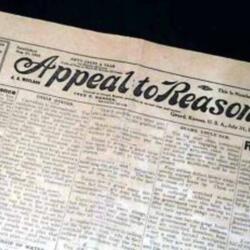 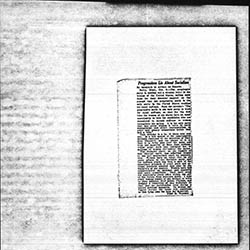 Addams apologizes for inaccurate information about the Socialist Party's endorsement of woman suffrage, which the Progressive Party circulated. The editor of the Appeal to Reason comments both before and after the published version of her letter.

The version included on microfilm was incomplete, so a new scan was obtained from the Appeal to Reason.