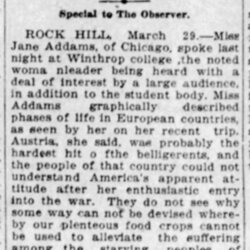 Special to The Observer.

ROCK HILL, March 29. -- Miss Jane Addams, of Chicago, spoke last night at Winthrop College, the noted woman leader being heard with a deal of interest by a large audience, in addition to the student body. Miss Addams graphically described phases of life in European countries, as seen by her on her recent trip. Austria, she said, was probably the hardest hit of the belligerents, and the people of that country could not understand America's apparent attitude after her enthusiastic entry into the war. They do not see why some way can not be devised whereby our plenteous food crops cannot be used to alleviate the suffering among the starving peoples of Europe. Notwithstanding their inability to understand the people have a kindly feeling toward the United States and realize that her aid has prevented many thousands from perishing by starvation. By request Miss Addams outlined briefly the work of Hull House, Chicago, and the benefits accruing from the Americanization of the aliens.

Addams describes the conditions in Europe and urges American aid to help them.