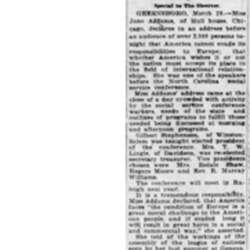 SHE PLEADS FOR A LEAGUE

MEET NEXT IN RALEIGH

Sessions Featured by Number
Addresses by Leaders in State and Nation.

Special to the Observer.

GREENSBORO, March 29. -- Miss Jane Addams, of Hull House, Chicago, declares in an address before an audience of over 2,000 persons tonight that America cannot evade its responsibilities to Europe; that whether America wishes it or not the nation must accept its place in the field of international relationships. She was one of the speakers before the North Carolina social service conference.

Miss Addams' address came at the close of a day crowded with activity by the social service conference [workers], needs of the state and outlines of programs to fulfill those needed being discussed at morning and afternoon programs.

The conference will meet in Raleigh next year.

It is a tremendous responsibility, Miss Addams declared, that America faces "the condition of Europe is a great moral challenge to the American people, and if evaded long it will result in great harm in a social and commercial way," she asserted.

She told of the workings of the assembly of the league of nations seen by her last summer at Geneva, and the audience heartily applauded when she stated that she supposed it was not necessary for her to defend the league in North Carolina. Her speech was a convincing argument for the entrance of the United States into the League of Nations. 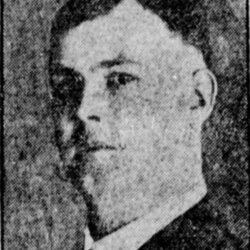 Addams argues that the United States must take a leading role in world affairs.