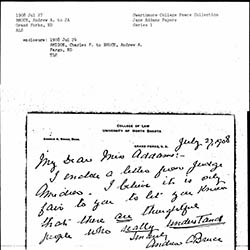 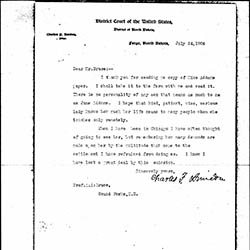 Charles Fremont Amidon was a U.S. federal judge and lawyer. Before becoming a lawyer, Amidon worked as a principal at a high school in Fargo, North Dakota. He then worked at the law firm Thomas & Benton as a student. Had his own private law practice with a partner from 1887 to 1890, Amidon & Bradley, and then again from 1894 to 1896, this time Benton, Amidon & Bradley, later becoming Benton & Amidon. From 1890 to 1894 he worked as a city attorney of Fargo. From 1893 to 1895 he was a Code Commissioner, Commission to Revise Codes of North Dakota. In August 1896, Amidon was given a recess appointment from President Grover Cleveland to sit on the U.S. District Court for the District of North Dakota when a seat was vacated by Alfred Delavan Thomas. In December 1896, Amidon was officially confirmed by the U.S. Senate. He served until his death, earning the title of Cleveland's longest-serving judicial appointment.