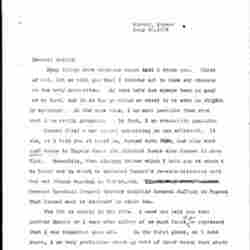 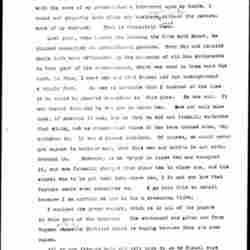 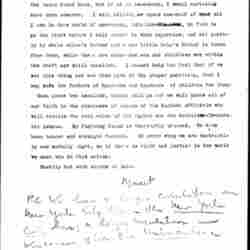 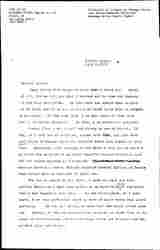 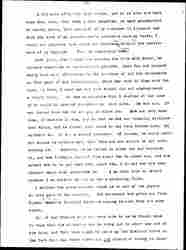 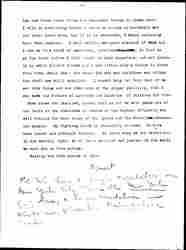 Many things have happened since last I wrote you. First of all, let me tell you that I decided not to take any chances on the baby proposition. My word here has always been as good as my bond, and it is too precious an asset to be ever so slightly mortgage. At the same time, I am more positive than ever that I am really pregnant. In fact, I am absolutely positive.

Manuel filed a new appeal submitting no new affidavit. It was, as I told you it would be, turned down flat; and also sent post haste to Topeka where the District Board also turned it down flat. Meanwhile, that strong letter which I told you we wrote to Baker and in which we enclosed [Manuel's] re-classification card had set thing humming in Washington. [illegible words] Provost Marshall General Crowder notified General Huffman at Topeka that [Manuel] must be replace in class two.

The fat is surely in the fire. I need not tell you that neither [Manuel] or I were ever either of us such fools ↑as↓ to represent that I was dependent upon him. In the first place, as I said above, I am very particular about my word of honor being kept above question. In the next place, we know that the truth always come out. Lastly, it was not necessary to deceive, as class four is the class in which husbands and fathers whose wives and children are dependent upon them belong. [page 2]

I did make affidavit last winter, and it is even now more true than then, that with a baby daughter, an aged grandmother of ninety years, with one-half of my business in Illinois and with the care of my grandmother's interests upon my hands, I could not properly look after our business ↑interests↓ without the assistance of my husband. That is absolutely true.

Last year, when [Manuel] was running the farm with Homer, he claimed exemption on agricultural grounds. Mary Fry and Leopold Smith both made affidavits to the accuracy of all his statements in that part of his [questionnaire], which was read to them word for word. In this, I need not say that [Manuel] did not misrepresent a single fact. He was so accurate that I doubted at the time if he would be granted exemption on this plea. He was not. It was turned down and he was put in class two. Now our only mistake, if mistake it was, may in that we did not formally withdraw that claim, but as [Manuel] said since it had been turned down, why withdraw it. It was a closed incident. Of course, we could never get anyone to believe now, that this was our motive in not withdrawing it. However, as he was put in class two and accepted it, and was formally changed from class two to class one, and his appeal was to be put back into class two, I do not see how that feature could ever embarrass us. I go into this in detail because I am certain we are in for a sickening fight.

I enclose the press report, which is in all of the papers in this part of the country. The statement was given out from Topeka [where] the District Board is raging because they are over ruled.

All of our friends here are very nice to us as [Manuel] says to them that his objection was to being put in class one out of his turn; and that this ought to clear up the District Board on the fact that men whose wives are not dependent belong in class [page 3] two and those whose wives are dependent belong in class four. I will do everything before I start an attack on Gaitskill and the local Board here, but if it is necessary, I shall certainly have them removed. I will willing to spend one-half of what all I own in this world if necessary, [illegible], in fact to go the limit before I will submit to this injustice; and sit quietly by while Alice's father and a new little baby's father is taken from them, while there are unmarried men and childless men within the draft age still uncalled. I cannot help but feel that if we see this thing out and then give it the proper publicity, that I may save the fathers of hundreds and hundreds of children for them.

When class two is called, Manuel will go and we will place all of our faith in the clearness of vision of the highest officials who will realize the real value of the Appeal and the Social-Democratic League. My fighting blood is thoroughly aroused. We have been honest and straight forward. At every step we are technically and morally right, so if there is right and justice in the world we must win in this matter.

Hastily but with oceans of love. 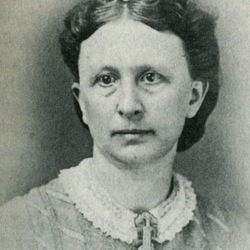 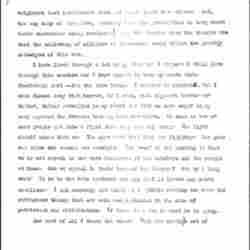 Marcet explains the draft appeals made by her husband, Manuel, and the injustice she feels in the draft system.