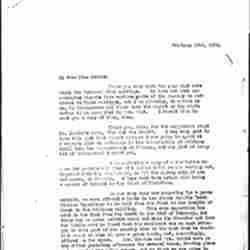 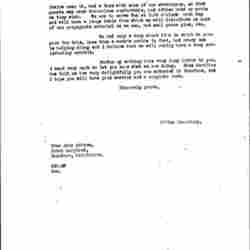 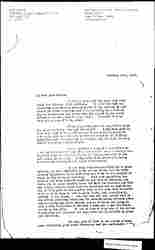 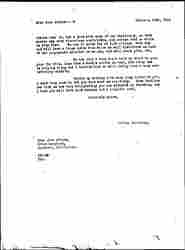 Thank you very much for your kind note about the February 22nd meetings. We have had most encouraging reports from various parts of the country in reference to these meetings, and I am planning, in a week or so, to incorporate all these into the report on the whole matter to be submitted to Mrs. Mead. I should like to send you a copy of this, also.

Thank you, also, for the suggestion about Dr. Jordan's book, "War and the Breed". I was very glad to have this just that moment because I was going to speak at a woman's club in reference to the introduction of military drill into the high-schools of Chicago, and was glad of every bit of information I could get.

I am enclosing a copy of a resolution we have had printed and also of a letter which we are sending out, together with the resolution, to all the [clubs,] both of men and women, in Chicago. I hope that this letter will bring a number of letters to the Board of Education.

We are very busy now preparing for a peace exhibit: we were offered a booth in the Panama Pacific Medal Winners Exposition to be held from the first to the twelfth of March in the Coliseum Building. This same exposition was held in New York from the tenth to the 22nd of February, but there was no peace exhibit there and when the director got into the middle west he found that the sentiment was so much stronger in this part of the country than in the west that he decided it would be wise to have a peace booth, and, accordingly, offered us the space. Mrs. Schütze and Mrs. [Lovett] were in the office yesterday afternoon for several hours, drawing plans and arranging the color scheme, and we think we are going to make a very attractive booth with plants and large literature charts on the wall. We are to have a large map of the United States with the branches and organizations represented by green and red stars.

We also plan to have in one corner a bookcase containing good peace literature and two comfortable [page 2] chairs near it, and a desk with some of our stationery, so that guests may make themselves comfortable, and either read or write as they wish. We are to serve Tea at 3:00 o'clock each day and will have a large table from which we will distribute as much of our propaganda material as we can, and sell peace pins, etc.

We had only a very short time in which to prepare for this, less than a week's notice in fact, but everyone is helping along and I believe that we will really have a very satisfactory exhibit.

Pardon my writing this very long letter to you. I want very much to let you know what we are doing. Miss Hamilton has told me how very delightfully you are situated in Pasadena, and I hope you will have good weather and a complete rest. 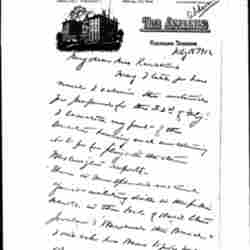 Karsten updates Addams on business in Chicago, including a resolution created to deter the Board of Education from implementing military drills in high schools and a peace exhibit to be held in March.