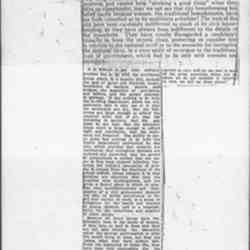 A city is in many respects a great business corporation, but in other respects it is enlarged housekeeping. If American cities have failed in the first, partly because officeholders have carried with them the predatory instinct learned in competitive business, and cannot help "working a good thing" when they have an opportunity, may we not say that city housekeeping has failed partly because women, the traditional housekeepers, have not been consulted as to its multiform activities? The men of the city have been carelessly indifferent to much of its civic housekeeping, as they have always been indifferent to the details of the household. They have totally disregarded a candidate's capacity to keep the streets clean, preferring to consider him in relation to the national tariff or to the necessity for increasing the national navy, in a pure spirit of reversion to the traditional type of government, which had to do only with enemies and outsiders.

It is difficult to see what military prowess has to do with the multiform duties which, in a modern city, include the care of parks and libraries, superintendence of markets, sewers and bridges, the inspection of provisions and boilers, and the proper disposal of garbage. It has nothing to do with the building department, which the city maintains that it may see to it that the basements are dry, that the bedrooms are large enough to afford the required cubic feet of air, that the plumbing is sanitary, that the gas pipes do not leak, that the tenement house court is large enough to afford light and ventilation, that the stairways are fireproof. The ability to carry arms has nothing to do with the health department maintained by the city, which provides that children are vaccinated, that contagious diseases are isolated and placarded, that the spread of tuberculosis is curbed, that the water is free from typhoid infection. Certainly the military conception of society is remote from the functions of the school boards, whose concern it is that children are educated, that they are supplied with kindergartens, and are given a decent place in which to play. The very multifariousness and complexity of a city government demand the help of minds accustomed to detail and variety of work, to a sense of obligation for the health and welfare of young children, and to a responsibility for the cleanliness and comfort of other people.

Because all these things have traditionally been in the hands of women, if they take no part in them now they are not only missing the education which the natural participation in civic life would bring to them, but they are losing what they have always had. From the beginning of tribal life, they have been held responsible for the health of the community, a function which is now represented by the health department. From the days of the cave dwellers, so far as the home was clean and wholesome, it was due to their efforts which are now represented by the Bureau of Tenement House Inspection. From the period of the primitive village, the only public sweeping which was performed was what they undertook in their [diverse] dooryards, that which is now represented by the Bureau of Street Cleaning. Most of the departments in a modern city can be traced to woman's traditional activity; but, in spite of this, so soon as these old affairs were turned over to the city they slipped from woman's hands, apparently because they then became matters for collective action and implied the use of the franchise -- because the franchise had in the first instance been given to the man who could fight because in the beginning he alone could vote who could carry a weapon, it was considered an improper thing for a woman to [possess] it.

Is it quite public spirited for woman to say, "We will take care of these affairs so long as they stay in our own houses, but if they go outside and concern so many people that they cannot be carried on without the mechanism of the vote, we will drop them; it is true that these activities which women have always had are not at present being carried on very well by the men in most of the great American cities, but because we do not consider it 'ladylike' to vote, we will let them alone?"

Addams, argues for woman suffrage claiming that municipal matters are directly related to their traditional responsibilities.