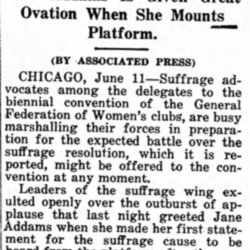 Jane Addams is Given Great Ovation When She Mounts Platform.

CHICAGO, June 11 -- Suffrage advocates among the delegates to the biennial convention of the General Federation of Women's clubs, are busy marshalling their forces in preparation for the expected battle over the suffrage resolution, which it is reported, might be offered to the convention at any moment.

Leaders of the suffrage wing exulted openly over the outburst of applause that last night greeted Jane Addams when she made her first statement for the suffrage cause to be heard from the platform after the convention was officially opened.

"Without the franchise," said Miss Addams, "women are suddenly out of the game. The game is played all over the world. This is proven by the statements of those who are, at this very moment, trying to translate the new school of sympathy into political action."

Addams discusses the value of the vote at the General Federation of Women's Clubs convention.