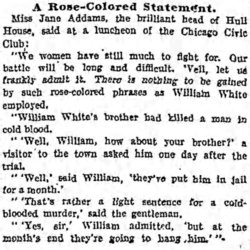 Miss Jane Addams, the brilliant head of Hull House, said at a luncheon of the Chicago Civic Club:

"We women have still much to fight for. Our battle will be long and difficult. Well, let us frankly admit it. There is nothing to be gained by such rose-colored phrases as William White employed.

"William White's brother had killed a man in cold blood.

"'Well, William how about your brother?' A visitor to the town asked him one day after the trial.

"'That's rather a light sentence for a cold-blooded murder,' said the gentleman.

Addams tells a story to illustrate the danger of looking at the struggle for women's rights through rose-colored glasses.