Every Progressive Democratic Government Must Include Woman Suffrage, November 1912 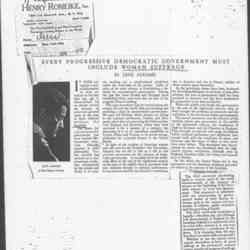 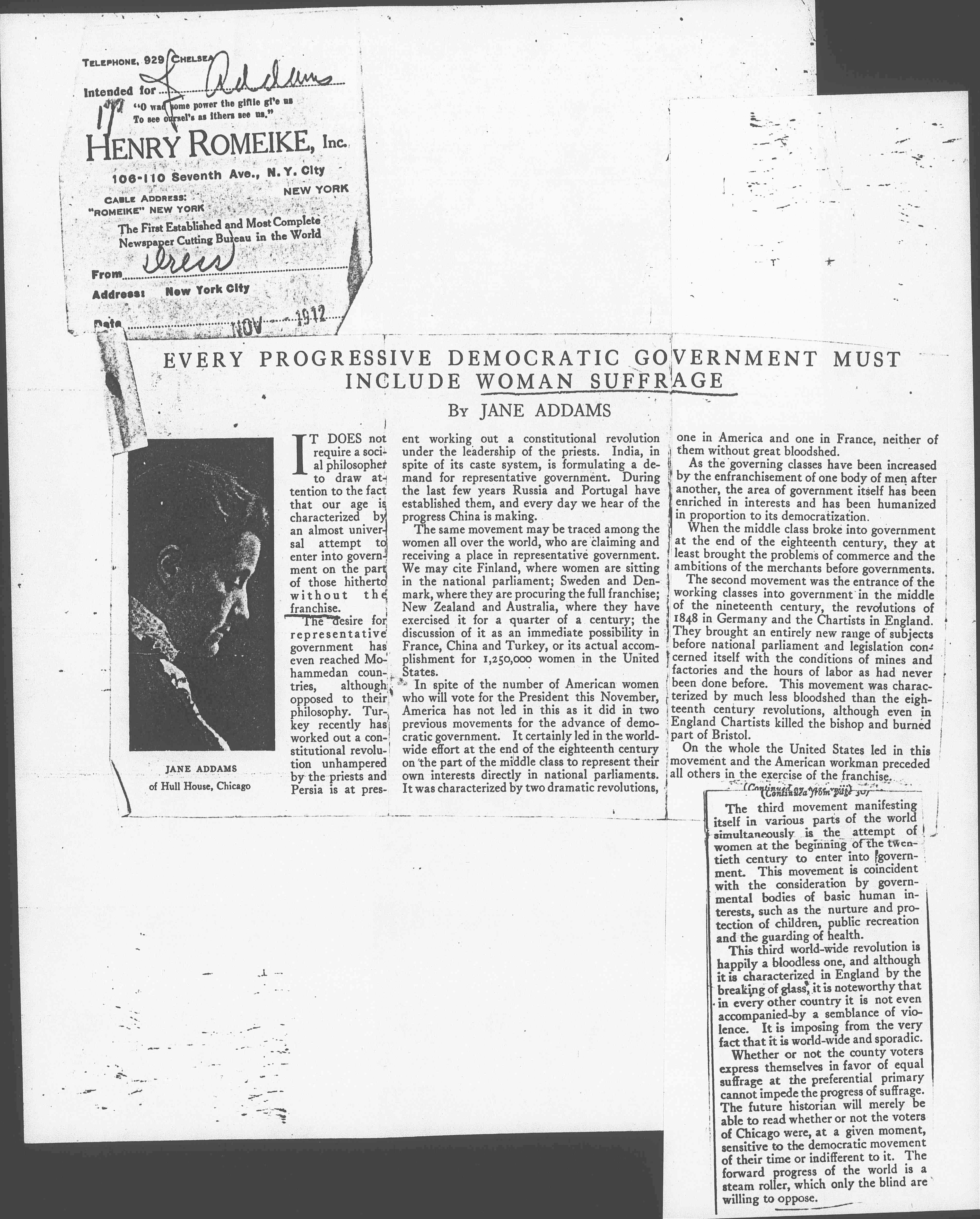 EVERY PROGRESSIVE DEMOCRATIC GOVERNMENT MUST
INCLUDE WOMAN SUFFRAGE

IT DOES not require a social philosopher to draw attention to the fact that our age is characterized by an almost universal attempt to enter into government on the part of those hitherto without the franchise.

The desire for representative government has even reached Mohammedan countries, although opposed to their philosophy. Turkey recently has worked out a constitutional revolution unhampered by the priests and Persia is at present working out a constitutional revolution under the leadership of the priests. India, in spite of its caste system, is formulating a demand for representative government. During the last few years Russia and Portugal have established them, and every day we hear of the Progress China is making.

The same movement may be traced among the women all over the world, who are claiming and receiving a place in representative government. During the last few years Russia and Portugal have established them, and every day we hear of the progress China is making.

The same movement may be traced among the women all over the world, who are claiming and receiving a place in representative government. We may cite Finland, where women are sitting in the national parliament; Sweden and Denmark, where they are procuring the full franchise; New Zealand and Australia, where they have exercised it for a quarter of a century; the discussion of it as an immediate possibility in France, China and Turkey, or its actual accomplishment for 1,250,000 women in the United States.

In spite of the number of American women who will vote for the President this November, America has not led in this as it did in two previous movements for the advance of democratic government. It certainly led in the worldwide effort at the end of the eighteenth century on the part of the middle class to represent their own interests directly in national parliaments. It was characterized by two dramatic revolutions, one in America and one in France, neither of them without great bloodshed.

As the governing classes have been increased by the enfranchisement of one body of men after another, the area of government itself has been enriched in interests and has been humanized in proportion to its democratization.

When the middle class broke into government at the end of the eighteenth century, they at least brought the problems of commerce and the ambitions of the merchants before governments.

The second movement was the entrace of the working classes into government in the middle of the nineteenth century, the revolutions of 1848 in Germany and the Chartists in England. They brought an entirely new range of subjects before national parliament and legislation concerned itself with the conditions of mines and factories and the hours of labor as had never been done before. This movement was characterized by much less bloodshed than the eighteenth century revolutions, although even in England Chartists killed the bishop and burned part of Bristol.

On the whole the United States led in this movement and the American workman preceded all others in the exercise of the franchise.

The third movement manifesting itself in various parts of the world simultaneously is the attempt of women at the beginning of the twentieth century to enter into government. This movement is coincident with the consideration by governmental bodies of basic human interests, such as the nurture and protection of children, public recreation and the guarding of health.

This third world-wide revolution is happily a bloodless one, and although it is characterized in England by the breaking of glass, it is noteworthy that in every other country it is not even accompanied by a semblence of violence. It is imposing from the very fact that it is world-wide and sporadic.

Whether or not the county voters express themselves in favor of equal suffrage at the preferential primary cannot impede the progress of suffrage. The future historian will merely be able to read whether or not the voters of Chicago were, at a given moment, sensitive to the democratic movement of their time or indifferent to it. The forward progress of the world is a steam roller, which only the blind are willing to oppose.

Addams argues that women's suffrage is a natural extension of the progress of democracy and offers examples throughout the world where woman are gaining the vote.