What the Progressive Party Means to Women, October 21, 1912 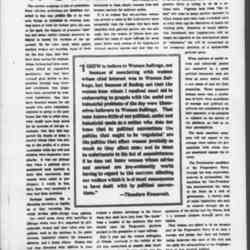 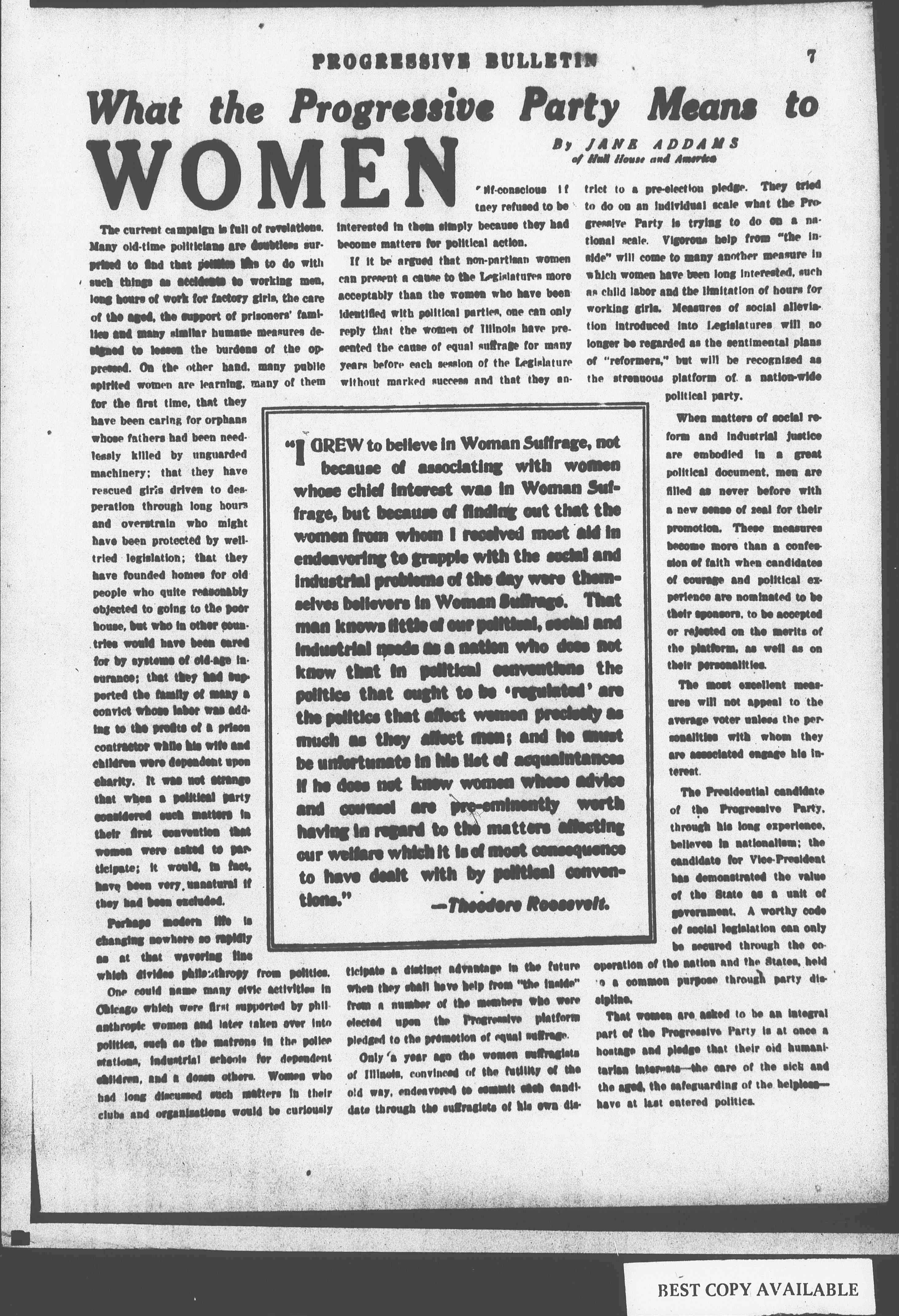 What the Progressive Party Means to WOMEN

By JANE ADDAMS
of Hull House and America

The current campaign is full of revelations. Many old-time politicians are doubtless surprised to find that politics has to do with such things as accidents to working men, long hours of work for factory girls, the care of the aged, the support of prisoners’ families and many similar humane measures designed to lessen the burdens of the oppressed. On the other hand, many public spirited women are learning, many of them for the first time, that they have been caring for orphans whose fathers had been needlessly killed by unguarded machinery; that they have rescued girls driven to desperation through long hours and overstrain who might have been protected by well-tried legislation; that they have founded homes for old people who quite reasonably objected to going to the poor house, but who in other countries would have been cared for by systems of old-age insurance; that they had supported the family of many a convict whose labor was adding to the profits of a prison contractor while his wife and children were dependent upon charity. It was not strange that when a political party considered such matters in their first convention that women were asked to participate; it would, in fact, have been very unnatural if they had been excluded.

One could name many civic activities in Chicago which were first supported by philanthropic women and later taken over into politics, such as the matrons in the police stations, industrial schools for dependent children, and a dozen others. Women who had long discussed such matters in their clubs and organizations would be curiously self-conscious if they refused to be interested in them simply because they had become matters for political action.

If it be argued that non-partisan women can present a cause to the Legislatures more acceptably than the women who have been identified with political parties, one can only reply that the women of Illinois have presented the cause of equal suffrage for many years before each session of the Legislature without marked success and that they anticipate a distinct advantage in the future when they shall have help from "the inside" from a number of the members who were elected upon the Progressive platform pledged to the promotion of equal suffrage.

Only a year ago the women suffragists of Illinois, convinced of the futility of the old way, endeavored to commit each candidate through the suffragists of his own district to a pre-election pledge. They tried to do on an individual scale what the Progressive Party is trying to do on a national scale. Vigorous help from "the inside" will come to many another measure in which women have been long interested, such as child labor and the limitation of hours for working girls. Measures of social alleviation introduced into Legislatures will no longer be regarded as the sentimental plans of "reformers," but will be recognized as the strenuous platform of a nation-wide political party.

When matters of social reform and industrial justice are embodied in a great political document, men are filled as never before with a new sense of zeal for their promotion. These measures become more than a confession of faith when candidates of courage and political experience are nominated to be their sponsors, to be accepted or rejected on the merits of the platform, as well as on their personalities.

The most excellent measures will not appeal to the average voter unless the personalities with whom they are associated engage his interest.

The Presidential candidate of the Progressive Party, through his long experience, believes in nationalism; the candidate for Vice-President has demonstrated the value of the State as a unit of government. A worthy code of social legislation can only be secured through the cooperation of the nation and the States, held to a common purpose through party discipline.

That women are asked to be an integral part of the Progressive Party is at once a hostage and pledge that their old humanitarian interests -- the care of the sick and the aged, the safeguarding of the helpless -- have at last entered politics.

[block quote centered on the page] "I grew to believe in Woman Suffrage, not because of associating with women whose chief interest was in Woman Suffrage, but because of finding out that the women from whom I received most aid in endeavoring to grapple with the social and industrial problems of the day were themselves believers in Woman Suffrage. That man knows little of our political, social and industrial needs as a nation who does not know that in political conventions the politics that ought to be 'regulated' are the politics that affect women precisely as much as they affect men; and he must be unfortunate in his list of acquaintances if he does not know women whose advice and counsel are [preeminently] worth having in regard to the matters affecting our welfare which it is of most consequence to have dealt with by political conventions." 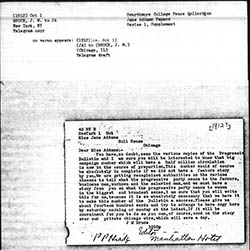 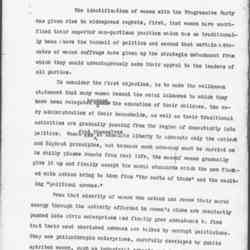 Addams argues that women's interests coincide with the work the Progressive Party is doing and that they should support it.