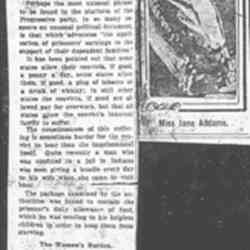 STATE SHOULD KEEP FAMILIES OF CONVICTS

Jane Addams Commends This Feature of the Platform of the Progressive Party.

Perhaps the most unusual phrase to be found in the platform of the Progressive party, in so many respects an unusual political document, is that which advocates "the application of prisoners' earnings to the support of their dependent families."

The consciousness of this suffering is sometimes harder for the convict to bear than the imprisonment itself. Quite recently a man who was confined in a jail in Indiana was seen giving a bundle every day to his wife when she came to visit him.

The package examined by the authorities was found to contain the prisoner's daily allowance of food, which he was sending to his helpless children in order to keep them from starving.

I easily recall a dozen splendid women whom I have known to toil early and late in the forlorn hope that they might "keep the children together until he comes out."

A woman whose husband was in the penitentiary for seven years because he forged a check to make the last delayed payment on their little house scrubbed in a downtown building, with hours from 6.30 to 9 o'clock in the morning and from 4 to 8 o'clock in the evening, so that she was always away at the very time that the children were home from school.

She did not realize until her oldest child, a boy of thirteen, was arrested for petit larceny that in striving to take a father's place she had also deprived her children of a mother's care.

She worked on, trying to support three people on $5 a week, until her little girl was brutally assaulted on the street, when she gave up the struggle and sent the children to institutions only one year before their father's return.

Slowly we are seeing the stupidity of such neglect. The judge of the Juvenile Court in Kansas City has power to give pensions to the wives or widows of convicts for the support of the children and the judge of the Juvenile Court in Chicago has the same power in regard to dependent children. Only in six states, however, does the prisoner receive compensation for his labor, and in only five does his dependent family obtain any assistance, although his earnings add steadily to the profits of prison contractors.

The care of the convict's family therefore is closely related to the whole question of contract labor in prisons, with its more serious feature of lowering the wages of free labor and competing the fair manufacturer out of the market.

Certainly when one contractor in workingmen's shirts controls eight prisons in six states, and when one furniture company controls the product of seven prisons in five states, it is important that a political party which has already pledged "the federal control over interstate commerce" to put its [program] into effect, should consider "the abolition of the convict contract labor system."

The Progressive party also advocates "the protection of life against the hazards of sickness, irregular employment and old age; through the adoption of a system of social insurance adapted to American use."

We all know many artisan families ever haunted by the dread that illness or nonemployment may at any moment separate the members and scatter them into public institutions because America has avoided insurance systems so well established in other great nations. 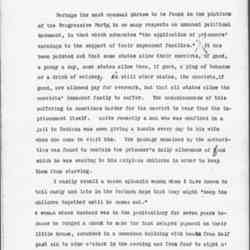 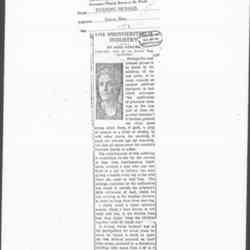 The Disinherited in Industry, October 5, 1912

Addams defends the Progressive Party plank that calls for the salaries earned by prisoners to be sent to support their dependent families.

This article was published in many newspapers under different titles between October 5-10, 1912. Among them were Prison Wages for Families (Buffalo Progressive, October 10, 1912, p. 3) and State Has Duty to Family of Each Convict (Indianapolis Star, October 7, 1912, p. 1).