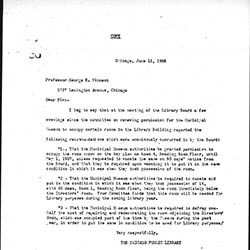 William Bailey Wickersham was the first Secretary of the Board of Directors for the Chicago Public Library, serving from 1872 to 1908. He graduated from Earlham College in 1867 and taught for some years before moving to Chicago and joining the Board of Directors. He was also the library's business and financial manager. Wickersham was a member of the Society of Friends. He also served as the president of his suburb's village board, his township's school board, and the Chicago literary club. He created the library's pension plan, and invented the library's library card pocket.

Wickersham married Mary Ruth Stout in 1869. They had four children together. Wickersham died in 1908.