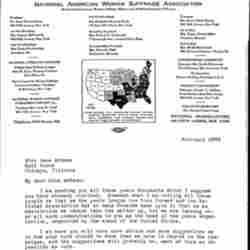 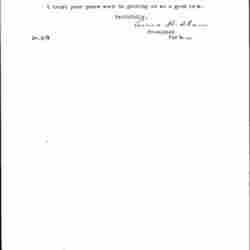 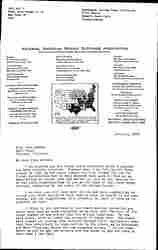 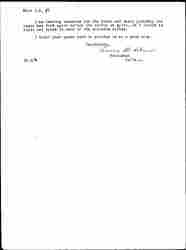 I am sending you all these peace documents which I suppose you have already received. However what I am telling all these people is that as the peace league has been formed and the National Association has so many demands made upon it that as an association we cannot take the matter up, but we are turning over all such communications to you as the head of the peace organization, organized by the women of the United States.

I am sure you will have more advice and more suggestions as to how your work should be done than we have in regard to the campaigns, and the suggestions will probably be, most of them as impossible as ours.

I think if you had been at our Board meeting yesterday you would have been as much disturbed as we were over the fact of the large number of new states that are having campaigns. We now have eight, with at least the prospect of three more. Why women will insist on pushing this measure through their legislature when they have absolutely no organization in the state, as in Tennessee and West Virginia, which are now campaign states, I do not know. Where we are to get the workers and the money to pay for them is more than I can tell. [page 2]

I am leaving tomorrow for the South and shall probably not reach New York again before the middle of April, as I intend to visit and speak in each of the Southern states.

I trust your peace work is getting on at a good rate.

Shaw reports that the National Association is unable take up the matter or peace, but is sending all communications to Addams as head of the peace movement in the United States.