Some Aspects of Child Labor Under the Present Illinois Law, March 4, 1906 (excerpts) 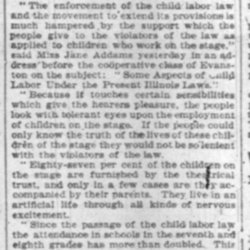 SAYS THE CHILD LABOR LAW IS HAMPERED BY PUBLIC.

"The enforcement of the child labor law and the movement to extend its provision is much hampered by the support which people give to the violators of the law as applied to children who work on the stage," said Miss Jane Addams yesterday in an address before the [cooperative] class of Evanston on the subject: "Some Aspects of Child Labor Under the Present Illinois Laws."

"Because it touches certain sensibilities that give the hearers pleasure, the people look with tolerant eyes upon the employment of children on the stage. If these people could only know the truth of the lives of these children of the stage they would not be so lenient with the violators of the law.

"Eighty-seven [percent] of the children onstage are furnished by the theatrical trust, and only in a few cases are they accompanied by their parents. They live in an artificial life through all kinds of nervous excitement.

"Since the passage of the child labor law the attendance in schools in the seventh and eighth grades has more than doubled. This is due to the fact that the parents have come to realize that their children must be able to read and write before they can go to work."

In answer to a question as to whether the preventing of children from working did not often work hardships on widowed mothers, Miss Addams replied:

"We have found that the little money that children under 14 years of age can earn does not compensate for their loss of earning power when they arrive at an age when they are strong enough to work."

Addams presents reasons to oppose the employment of young children in the theater.