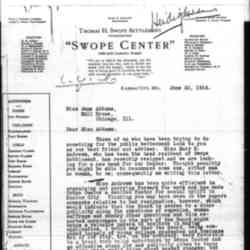 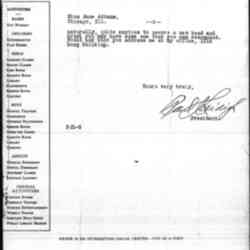 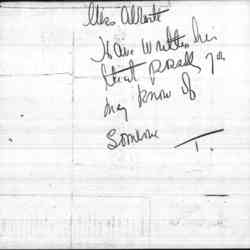 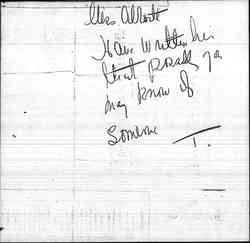 Those of us who have been trying to do something for the public betterment look to you as our best friend and adviser. Miss Mary E. Andrews, who has been the head resident of Swope Settlement, has recently resigned and we are looking for a new head for our Center. Thought possibly you might be able to recommend some one, either man or woman, to us; consequently am writing this letter.

Miss Andrews has been quite efficient in organizing and carrying forward the work and has made Swope Center a decided factor for social uplift in Kansas City. Thinking you may have seen in the papers comments relative to her resignation, however, which would indicate that the Board is averse to a wider publicity along the questions of eugenics, woman suffrage and sundry other questions and this reported narrowness on the part of the Board might cause a valuable person to hesitate in making application, I would say that the Board, being composed largely of young college graduates and business men of our city, are, on the contrary, very favorable to a broad work being undertaken by Swope Center and an effective stand for and publicity given to those factors which would bring about needed changes; but we felt that Miss Andrews had been unfortunate in her manner of expressing her views on the question of eugenics; consequently, when her resignation came in conditioned upon her being given free rein to write and lecture on this and kindred other subjects which, in her judgment, should be for the betterment of the community, we felt that the citizens of Kansas City would not approve of our surrendering control to one person, rather than vesting it in the Board. We are, [page 2] naturally, quite anxious to secure a new head and trust you may have some one that you can recommend. Would ask that you address me at my office, 1216 Long Building. 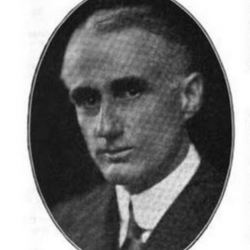 Leidigh asks Addams for a recommendation to fill an opening as head resident for the Swope Center.

A note written on page 2 reads:

Have written him that probably you may know of someone.  T."