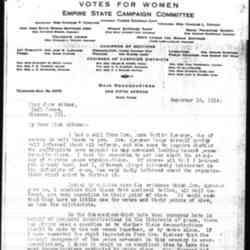 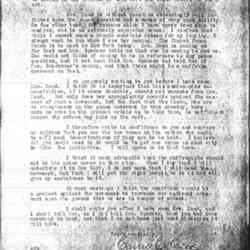 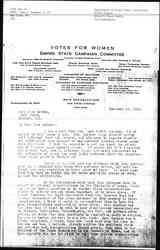 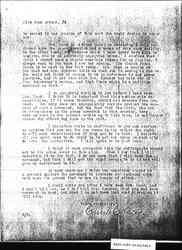 I had a call from Mrs. Anna Garlin Spencer, who of course is well known to you. Mrs. Spencer keeps herself pretty well informed about all reforms, and she came to inquire whether the suffragists were engaged in any movement looking toward peace demonstrations. I took the occasion to ask her about the standing of various peace organizations. Of course all that I learned you already know, but I, although always intensely interested in the principle of peace, was very badly informed about the organizations which exist to further it.

Basing my opinion upon the evidence which Mrs. Spencer gave me, I conclude that these four national bodies, all well endowed, are very masculine in their point of view. It would seem that they have as little use for women and their points of view, as have the militarists.

In the discussions which have been numerous here in behalf of proposed demonstrations in the interests of peace, there has always been a questions as to whether these demonstrations should be made by men and women together, or by women alone. If I have received the right impression from Mrs. Spencer that the present management of the peace movement in this country is overmasculinized, I think it would be an excellent idea to have the next demonstrations conducted by women alone. Mrs. Spencer had the idea that it might be well to have simultaneous demonstrations in Chicago, Washington, Philadelphia, New York, and perhaps other cities, at which time some manifesto or resolution would be adopted. She was in Boston and went to see Mrs. Mead. Mrs. Spencer was a little chagrined, I think, when Mrs. Mead took over the idea as her own and has, I believe, already written the manifesto which she proposes such demonstrations should adopt. Mrs. Mead is the Chairman of the Peace Department in the Council of Women, and in this capacity she has the right to call upon various organizations [page 2] to assist in any program of this sort she might desire to carry out.

Mrs. Mead is without question exceedingly well informed upon the peace question and a woman of very rare ability. On the other hand, for reasons which I have never been able to analyze, she is an extremely unpopular woman. I confess that while I cannot name a single sensible reason for my feeling, I always want to run when I see her coming. The Church Peace Union is to meet in New York today. Mrs. Mead is coming on for that and Mrs. Spencer tells me that she is coming to see me. She would not think of coming to me in reference to any peace question, had it not been that Mrs. Spencer had told her of Mrs. Schwimmer's coming, and that there might be a suffrage movement on foot.

I am purposely writing to you before I have seen Mrs. Mead. I think it is important that this nation-wide demonstration, if it seems feasible, should not emanate from Mrs. Mead. Not only does her unpopularity operate against the success of such a movement, but the fact that the Meads, who are so conspicuous in the peace movement in this country, have made no move in the present crisis up to this time, is sufficient reason why others may take up the work.

I therefore write in confidence to you and express my opinion that you are the one woman in the nation who ought to call such demonstrations if they are to be held. I believe all you would need to do would be to get one woman in each city to take the initiative. I will agree to do that here.

I think it most advisable that the suffragists should not be the prime mover in this stop. When I say that I will undertake it in New York, I do not mean that I will head the movement, but that I will get the right people to do it and will give my assistance to it.

At such meetings I think the manifesto should be a protest against the movement to increase our national armament upon the ground that we are in danger of attack.

I shall write you after I have seen Mrs. Mead, and I shall tell her, as I did tell Mrs. Spencer, that you had some movement in hand, but that I do not know just what direction it will take.

Catt discusses the current peace movement as "over masculine" with little interest in the point of view of women. She suggests that women organize a demonstration alone.