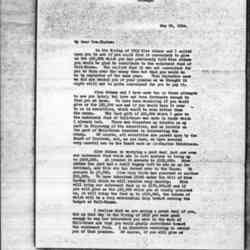 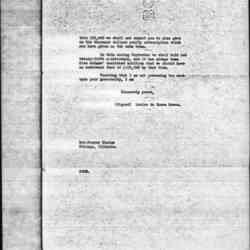 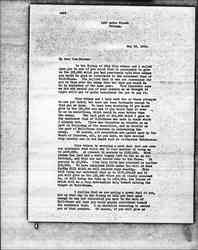 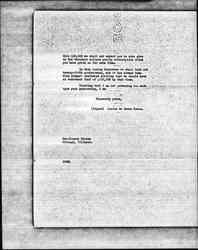 In the Spring of 1912 Miss Addams and I called upon you to ask if you could find it convenient to give us the $25,000 which you had previously told Miss Addams you would be glad to contribute to the endowment fund of Hull-House. You replied that it was not convenient for you to turn over the money then but that you would do so in September of the same year. Then September came we did not remind you of your promise as we thought it might still not be quite convenient for you to pay it.

Miss Addams and I have made two or three attempts to see you lately but have not been fortunate enough to find you at home. We have been wondering if you would give us the $25,000 now and if you would turn it over to us in securities, which would be even better than the money. The last gift of $40,000 which I gave to the endowment fund of Hull-House was made in bonds which I already had. There was therefore no trouble on the part of Hull-House trustees in reinvesting the money. Of course, all securities are passed upon by the Board of Trustees, and, as you know, we have several very careful men on the Board such as Mr. Charles Hutchinson.

Miss Addams is worrying a good deal just now over our endowment fund which she is most anxious to bring up to $200,000. At present it amounts to $152,000. Miss Addams has just had a small legacy left to her as an individual, and this she has turned over to the House. It amounts to $7,500. Miss Mary Smith has promised us another $10,000. We have inherited $5000 under the will of Miss Martha Hill which we will receive very shortly. This will bring our endowment fund up to $175,000.00 and if you will give us the $25,000 which you so kindly promised us, it will bring the fund up to $200,000, the income of which will be a very substantial help toward raising the budget at Hull-House.

I realize that we are asking a great deal of you, but on that day in the Spring of 1912 you were good enough to say how interested you were in the work of Hull-House and that you would gladly contribute toward the endowment fund. I am therefore venturing to remind you of that promise. Of course, if you will give us [Page 2] this $25,000 we shall not expect you to also give us the thousand dollars yearly subscription which you have given us for some time.

In this coming September we shall hold out twenty-fifth anniversary, and it has always been Miss Addams' cherished ambition that we should have an endowment fund of $200,000 by that time.

Trusting that I am not presuming too much upon your generosity, I am 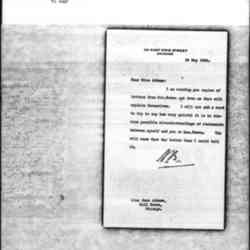 Bowen asks Blaine for a donation to Hull-House endowment that she promised some years back.