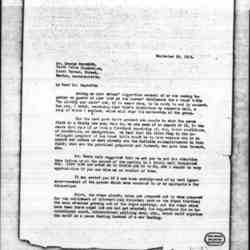 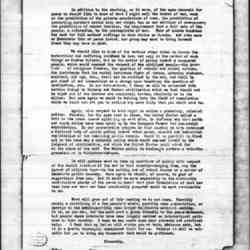 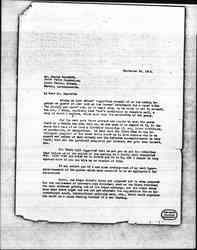 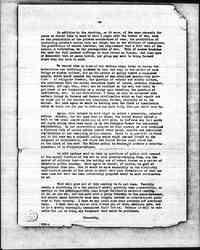 Acting on Miss Addams' suggestion several of us are coming together as guests of Miss Wald at the Nurses' Settlement for a round table "to clarify our minds" and, if it seems wise, to be ready to act in concert. You are, I think, receiving Miss Wald's invitation by separate mail, a copy of which I enclose, which will show the membership of the group.

For the most part those present are people to whom the peace field is a fairly new one; that is, we are none of us expert at it, in the sense that some of us have a firsthand knowledge of, say, labor conditions, of sanitation, or immigration. We feel that the first step in the intelligent progress of the round table would be to have someone who is so expert set before us what already are the definite accomplishments in this field; what are the practical proposals put forward; who puts them forward, etc.

Mr. Henry Holt suggested we ask you to put the situation thus before us at the outset of the meeting in a fairly well formulated way. Miss Wald has asked me to invite you so to do, and I should be very appreciative if you can wire me on receipt of this.

It may assist you if I set down crudely -- out of my vast ignorance -- several of the points which have occurred to us as appropriate for discussion:

First, the steps already taken and proposed and by whom proposed for the settlement of international disputes; such as the Bryan treaties; the main advances growing out of the Hague meetings, and the steps which have been there urged but are not yet adopted; the suggestions for an international court, international policing navy, etc., which would organize the world on a peace footing instead of a war footing. [page 2]

In addition to the charting, as it were, of the open channels for peace we should like to know of what I might call the brakes of war, such as the prohibition of the private manufacture of arms, the prohibition of converting merchant marine into war ships; tax on war editions of newspapers; the prohibition of secret treaties, the requirement that a full vote of the people, a referendum, be the prerequisite of war. This of course broaches the need for full manhood suffrage in such states as Russia. And even more as Democrats than as peace lovers, our group may want to bring forward ideas they may have in mind.

We should like to know of the various steps taken to lessen the barbarities and suffering incident to law; not only in the matter of such things as dumdum bullets, but in the matter of policy toward a conquered people, which would command the respect of the civilized people -- the question of religious freedom, the question of schools and racial culture, the insistence that the social insurance funds of Europe, covering sickness, accident, old age, etc., shall not be scuttled by the war, and shall be put ahead of war indemnities as a charge upon taxation; the question of landlordism, etc. In our discussions, I fancy we will be concerned with certain things in Germany and German civilization which we feel should not be wiped out if the Germans are completely beaten; similarly as to the allies. But here again we would be delving into the field of speculation which we would not ask you to outline any more fully than you would care to.

Again, with respect to what might be called a planetary, colonial policy. Standing for the open door in China, the United States called a halt on the trend toward splitting up east Asia, in the same way that north and south Africa have been split up by the European Powers for commercial exploitation. In our conservation program in this country we have developed a distinct body of public policy toward water power, mineral and industrial exploitation of the remaining public domain. Would it be possible to block out in the same way a colonial policy which would commend itself to the judgement of civilization, and which the United States could stand for at the close of the war? The Wilson policy in Mexico; is perhaps a valuable precedent as to disinterestedness.

We will perhaps want to take questions of policy with respect of the social reaction of the war in this country -- ranging from, say the spread of military toys -- to the cutting out of school houses as a matter of immediate public economy. Here again we should, of course, be glad of suggestions from you. But it would be more especially in the distinctly constructive phases of the peace movement that your formulation of what has been done and what has been practically proposed would be most serviceable to us.

What will grow out of this meeting we do not know. Possibly merely a clarifying of a few people's minds; possibly some presentation, or message to the public; possibly some larger deliberate national meeting. It is, as you see, for the most part a group friendly to the peace movement, but people whose interests have been largely centered on international policies in this country. I hope we may count upon your presence and practical help. I feel that my letter will strike you as being [at loose] ends, but it is a pretty thoroughly unexplored field for me. Perhaps it will be valuable for you to bring any documents that would be pertinent. 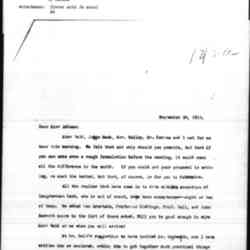 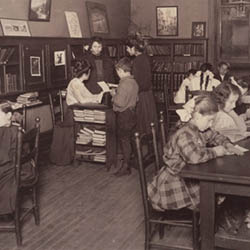 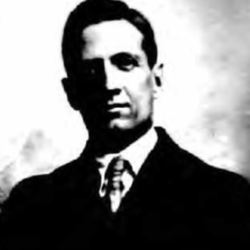 Kellogg asks Naysmith to join a Round Table discussion on peace at Hull-House.