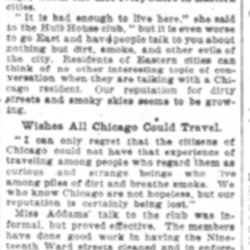 JANE ADDAMS ANNOYED BY CRITICS IN THE EAST.

Hastens Back to Hull House to Escape Being Quizzed About Muddy Streets and Smoky Skies -- Tells Club All Residents Ought to Travel and Learn How City Is Losing Its Reputation Among People on the Atlantic Coast.

Miss Jane Addams returned yesterday from an Eastern trip and sought Hull House as a refuge from the annoying critics of Chicago, whom she met everywhere in Eastern cities.

"It is bad enough to live here," she said to the Hull House club, "but it is even worse to go East and have people talk to you about nothing but dirt, smoke, and other evils of the city. Residents of Eastern cities can think of no other interesting topic of conversation when they are talking with a Chicago resident. Our reputation for dirty streets and smoky skies seems to be growing.

Wishes All Chicago Could Travel.

"I can only regret that the citizens of Chicago could not have that experience of traveling among people who regard them as curious and strange beings who live among piles of dirt and breathe smoke. We who know Chicago are not hopeless, but our reputation is certainly being lost."

Miss Addams' talk to the club was informal, but proved effective. The members have done good work in having the Nineteenth Ward streets cleaned and in enforcing the anti-smoke ordinances. They will continue their efforts in this direction.

The Chicago Woman's club considered a kindred subject at its afternoon meeting. The various departments recommended lines of work which they advised the club to take up next year. The home department wanted the club members to spend all their time in a study of domestic science. The education department is of the opinion that the most important need is to establish social centers in the schools. The art and literature department wants the members to turn out and work for a large increase in the membership of the Municipal Art league.

Neighborhood improvement clubs is the aim of the philanthropy department. They want many of these clubs formed to interest themselves in public questions and act as vigilance committees. The reform department suggests that the club select one of the municipal laws which are not being enforced and make an effort to have it strictly observed. 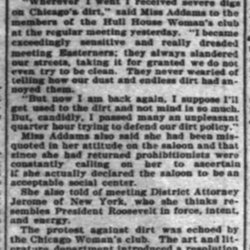