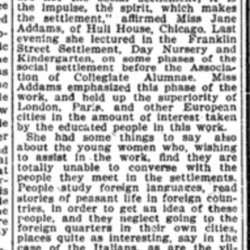 "We need to get back to the first idea, that of simply living in a poor neighborhood first and foremost, even if we do not enter into the lives and activities of those about us. The activities, the clubs, the classes, etc., are not the social settlement; it is the impulse, the spirit, which makes the settlement," affirmed Miss Jane Addams, of Hull House, Chicago. Last evening she lectured in the Franklin Street Settlement, Day Nursery and Kindergarten, on some phases of the social settlement before the Association of Collegiate Alumnae. Miss Addams emphasized this phase of the work, and held up the superiority of London, Paris, and other European cities in the amount of interest taken by the educated people in this work.

She had some things to say also about the young women who, wishing to assist in the work, find they are totally unable to converse with the people they meet in the settlements. People study foreign languages, read stories of peasant life in foreign countries, in order to get an idea of these people, and they neglect going to the foreign quarters in their own cities, places quite as interesting, say in the case of the Italians, as are the villages of Italy themselves. The young woman who is unable to adapt herself to any sphere outside that of her own immediate environment, is not educated at all, the speaker contended. Indeed the whole idea which Miss Addams seemed to be endeavoring to convey was the imperative necessity of a closer intercourse socially.

"I understand there are a great many Poles in your city," said Miss Addams. "I should like to know how many of you have ever talked face to face with these people, and asked them concerning their hopes and fears; yet perhaps many of you have been to Warsaw, and a great many, I will guarantee, have cried over 'Thaddeus of Warsaw.' " 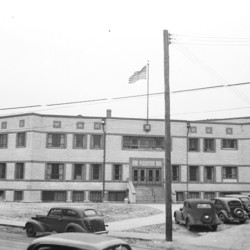 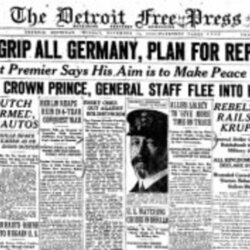 Addams speaks to the Franklin Street Settlement in Detroit about working in a settlement.