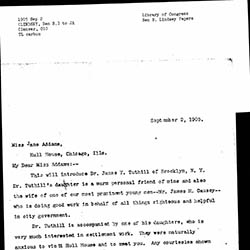 James H. Causey moved from Baltimore to Denver in 1900. After gaining experience as a businessman, Causey opened a municipal bond brokerage firm, which later merged with the firm Sweet and Foster. After World War I, he formed James H. Causey & Co., which was located in both Denver and New York. Causey donated much of his wealth to charity. He was a Progressive and the owner of the Retail District Investment Company. Causey was involved in the Denver Tramway strike of 1920, and he became very sensitive to labor issues. Because of this, Causey and Dr. Heber Reece Harper, Chancellor of Denver University, formed the Social Science Foundation in order to educate people on foreign affairs and create future international leaders.