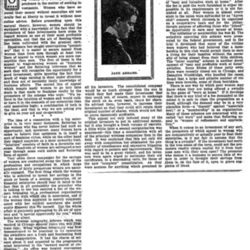 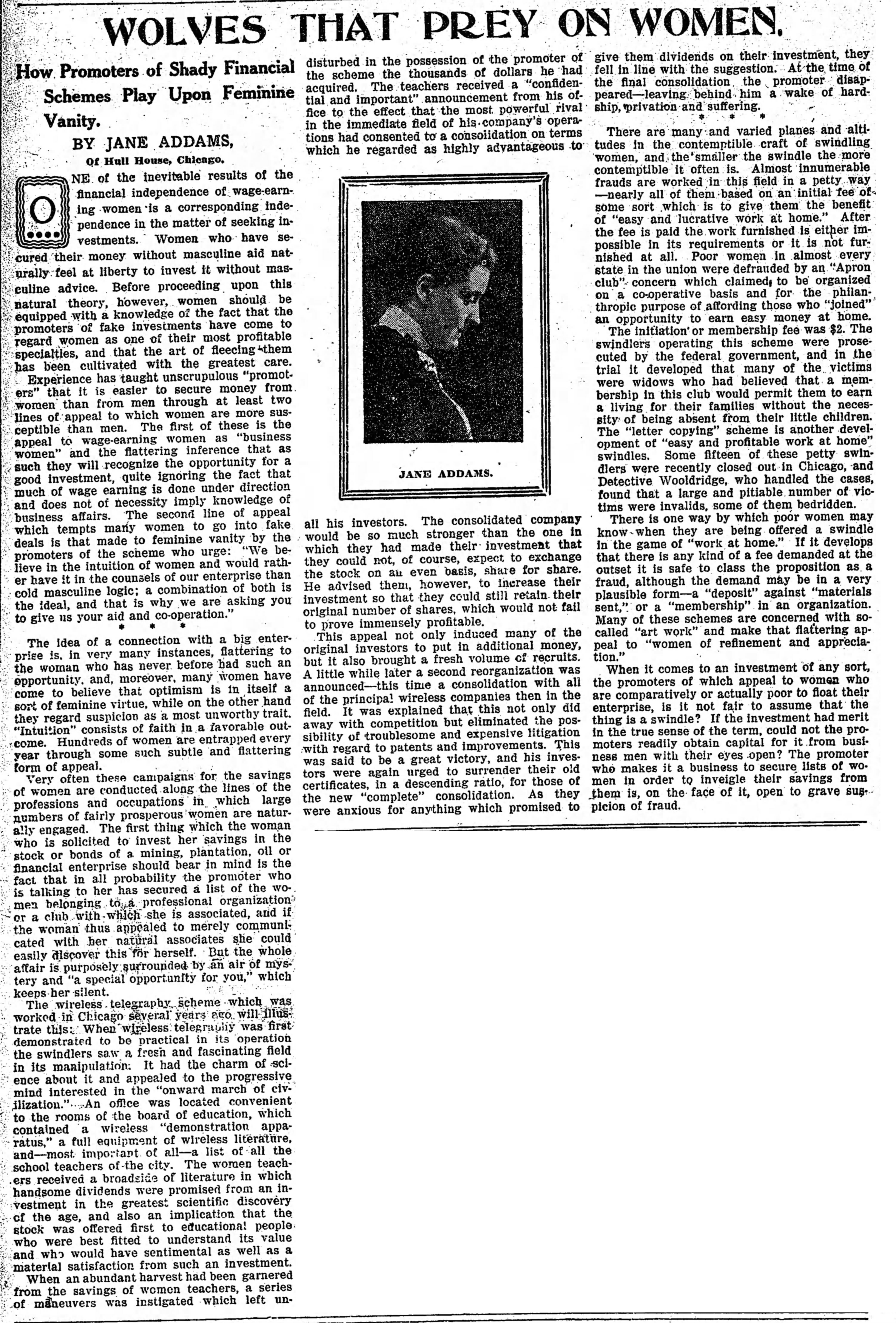 How Promoters of Shady Financial Schemes Play Upon Feminine Vanity.

ONE of the inevitable results of the financial independence of wage-earning women is a corresponding independence in the matter of seeking investments. Women who have secured their money without masculine aid naturally feel at liberty to invest it without masculine advice. Before proceeding upon this natural theory, however, women should be equipped with a knowledge of the fact that the promoters of fake investments have come to regard women as one of their most profitable specialties, and that the art of fleecing them has been cultivated with the greatest care.

Experience has taught unscrupulous "promoters" that it is easier to secure money from women than from men through at least two lines of appeal to which women are more susceptible than men. The first of these is the appeal to wage-earning women as "business women" and the flattering inference that as such they will recognize the opportunity for a good investment, quite ignoring the fact that much of wage earning is done under direction and does not of necessity imply knowledge of business affairs. The second line of appeal which tempts many women to go into fake deals is that made to feminine vanity by the promoters of the scheme who urge: "We believe in the intuition of women and would rather have it in the counsels of our enterprise than cold masculine logic; a combination of both is the ideal, and that is why we are asking you to give us your aid and [cooperation]."

Very often these campaigns for the savings of women are conducted along the lines of the professions and occupations in which large numbers of fairly prosperous women are naturally engaged. The first thing which the woman who is solicited to invest her savings in the stock or bonds of a mining, plantation, oil or financial enterprise should bear in mind is the fact that in all probability the promoter who is talking to her has secured a list of the women belonging to a professional organization or a club with which she is associated, and if the woman thus appealed to merely communicated with her natural associates she could easily discover this for herself. But the whole affair is purposely surrounded by an air of mystery and "a special opportunity for you," which keeps her silent.

The wireless telegraphy scheme which was worked in Chicago several years ago will illustrate this: When wireless telegraphy was first demonstrated to be practical in its operation the swindlers saw a fresh and fascinating field in its manipulation. It had the charm of science about it and appealed to the progressive mind interested in the "onward march of civilization." An office was located convenient to the rooms of the board of education, which contained a wireless "demonstration apparatus," a full equipment of wireless literature, and -- most important of all -- a list of all the school teachers in the city. The women teachers received a broadside of literature in which handsome dividends were promised from an investment in the greatest scientific discovery of the age, and also an implication that the stock was offered first to educational people who were best fitted to understand its value and who would have sentimental as well as a material satisfaction from such an investment.

When an abundant harvest had been garnered from the savings of women teachers, a series of maneuvers was instigated which left undisturbed in the possession of the promoter of the scheme the thousands of dollars he had acquired. The teachers received a "confidential and important" announcement from his office to the effect that the most powerful rival in the immediate field of his company's operations had consented to a consolidation on terms which he regarded as highly advantageous to

all his investors. The consolidated company would be so much stronger than the one in which they had made their investment that they could not, of course, expect to exchange the stock on an even basis, share for share. He advised them, however, to increase their investment so that they could still retain their original number of shares, which would not fail to prove immensely profitable.

This appeal not only induced many of the original investors to put in additional money, but it also brought a fresh volume of recruits. A little while later a second reorganization was announced -- this time a consolidation with all of the principal wireless companies then in the field. It was explained that this not only did away with competition, but eliminated the possibility of troublesome and expensive litigation with regard to patents and improvements. This was said to be a great victory, and his investors were again urged to surrender their old certificates, in a descending ratio, for those of the new "complete" consolidation. As they were anxious for anything which promised to give them dividends on their investment, they fell in line with the suggestion. At the time of the final consolidation the promoter disappeared -- leaving behind him a wake of hardship, privation and suffering.

There are many and varied planes and altitudes in the contemptible craft of swindling women, and the smaller the swindle the more contemptible it often is. Almost innumerable frauds are worked in this field in a petty way -- nearly all of them based on an initial fee of some sort which is to give them the benefit of "easy and lucrative work at home." After the fee is paid the work furnished is either impossible in its requirements or it is not furnished at all. Poor women in almost every state in the union were defrauded by an "Apron club" concern which claimed to be organized on a [cooperative] basis and for the philanthropic purpose of affording those who "joined" an opportunity to earn easy money at home.

The initiation or membership fee was $2. The swindlers operating this scheme were prosecuted by the federal government, and in the trial it developed that many of the victims were widows who had believed that a membership in this club would permit them to earn a living for their families without the necessity of being absent from their little children. The "letter copying" scheme is another development of "easy and profitable work at home" swindles. Some fifteen of these petty swindlers were recently closed out in Chicago, and Detective Wooldridge, who handled the cases, found that a large and pitiable number of the victims were invalids, some of them bedridden.

There is one way by which poor women may know when they are being offered a swindle in the game of "work at home." If it develops that there is any kind of a fee demanded at the outset it is safe to class the proposition as a fraud, although the demand may be in a very plausible form -- a "deposit" against "materials sent," or a "membership" in an organization. Many of these schemes are concerned with so-called "art work" and make that flattering appeal to "women of refinement and appreciation."

When it comes to an investment of any sort, the promoters of which appeal to women who are comparatively or actually poor to float their enterprise, is it not fair to assume that the thing is a swindle? If the investment had merit in the true sense of the term, could not the promoters readily obtain capital for it from business men with their eyes open? The promoter who makes it a business to secure lists of women in order to inveigle their savings from them is, on the face of it, open to grave suspicion of fraud. 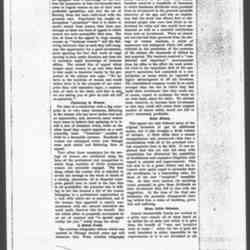 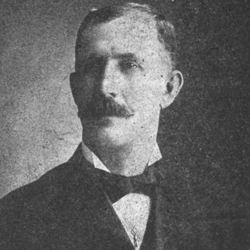 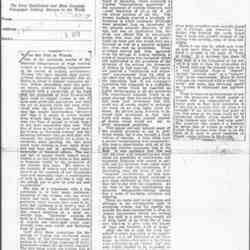 Addams warns independent women against men who will try to take advantage of them in matters of money. This column appeared with slight variations in a number of newspapers between 1907-1910.

This article was also published in the Richmond Times-Dispatch, and the Detroit Free Press (September 29, 1907); the Los Angeles Times (October 10, 1907); the Carbondale Daily Free Press and the Independence Evening Star (November 9, 1907); the Colfax Chronicle (February 15, 1908); the Courtland Journal and the Beloit Daily Call (February 21, 1908),