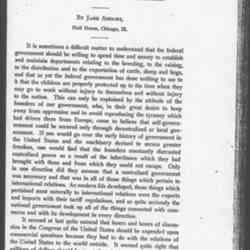 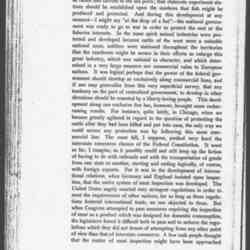 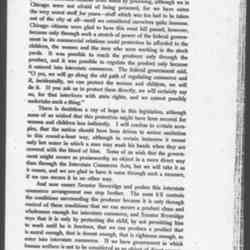 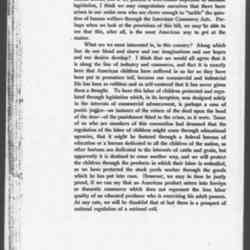 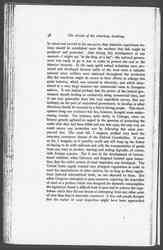 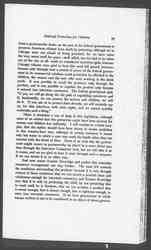 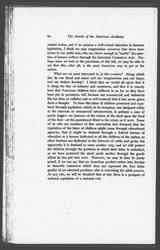 It is sometimes a difficult matter to understand that the federal government should be willing to spend time and money to establish and maintain departments relating to the breeding, to the raising, to the distribution and to the exportation of cattle, sheep and hogs, and that as yet the federal government has done nothing to see to it that the children are properly protected up to the time when they may go to work without injury to themselves and without injury to the nation. This can only be explained by the attitude of the founders of our government, who, in their great desire to keep away from oppression and to avoid reproducing the tyranny which had driven them from Europe, came to believe that self-government could be secured only through decentralized or local government. If one would go over the early history of government in the United States and the machinery devised to secure greater freedom, one would find that the founders constantly distrusted centralized power as a result of the inheritance which they had brought with them and from which they could not escape. Only in one direction did they assume that a centralized government was necessary and that was in all of those things which pertain to international relations. As modern life developed, those things which pertained most naturally to international relations were the exports and imports with their tariff regulations, and so quite seriously the national government took up all of the things connected with commerce and with its development in every direction.

It seemed at last quite natural that hours and hours of discussion in the Congress of the United States should be expended upon commercial questions because they had to do with the relations of the United States to the world outside. It seemed quite right that millions of dollars should be spent that the best sort of grain might [page 2] be raised and carried to the sea ports; that elaborate experiment stations should be established upon the seashore that fish might be produced and protected. And during this development at any moment -- I might say "at the drop of a hat" -- the national government was ready to go to war in order to protect the seal or the fisheries interests. In the same spirit animal industries were protected and developed because cattle of the west were a valuable national asset, soldiers were stationed throughout the territories that the ranchmen might be secure in their efforts to enlarge this great industry, which was national in character, and which determined in a very large measure our commercial value to European nations. It was logical perhaps that the power of the federal government should develop so exclusively along commercial lines, and if one may generalize from this very superficial survey, that any tendency on the part of centralized government, to develop in other directions should be resented by a liberty-loving people. This development along one exclusive line has, however, brought some embarrassing results. For instance, quite lately, in Chicago, when we became greatly agitated in regard to the question of protecting the cattle after they had been killed and put into cans, the only way we could secure any protection was by following this same commercial line. The meat bill, I suppose, pushed very hard the interstate commerce clauses of the Federal Constitution. It went as far, I imagine, as it possibly could and still keep up the fiction of having to do with railroads and with the transportation of goods from one state to another, starting and ending logically, of course, with foreign exports. For it was in the development of international relations, when Germany and England insisted upon inspection, that the entire system of meat inspection was developed. The United States sagely enacted very stringent regulations in order to meet the requirements of other nations, for so long as these regulations fostered international trade, no one objected to them. But when Congress attempted to pass measures requiring the inspection of meat as a product which was designed for domestic consumption, the legislators found it difficult both to pass and to enforce the regulations which they did not dream of attempting from any other point of view than that of interstate commerce. A few rash people thought that the matter of meat inspection might have been approached [page 3] from a praiseworthy desire on the part of the federal government to preserve American citizens from death by poisoning, although we in Chicago were not afraid of being poisoned, for we have eaten the very worst stuff for years -- stuff which was too bad to be taken out of the city at all -- until we considered ourselves quite immune. Chicago citizens were glad to have this meat bill passed, however, because only through such a stretch of power of the federal government in its commercial relations could protection be afforded to the children, the women and the men who were working in the stock yards. It was possible to reach the producer only through the product, and it was possible to regulate the product only because it entered into interstate commerce. The federal government said, "O yes, we will go along the old path of regulating commerce and if, incidentally, we can protect the women and children, we will do it. If you ask us to protect them directly, we will certainly say no, for that interferes with state rights, and we cannot possibly undertake such a thing."

There is doubtless a ray of hope in this legislation, although some of us wished that this protection might have been secured for women and children less indirectly. I will confess to certain scruples, that the nation should have been driven to secure sanitation in this round-a-bout way, although in certain instances it meant only hot water in which a man may wash his hands when they are covered with the blood of [cows]. Some of us wish that the government might secure so praiseworthy an object in a more direct way than through the Interstate Commerce Acts, but we will take it as it comes, and we are glad to have it come through such a measure, if we can secure it in no other way.

And now comes Senator Beveridge and pushes this interstate commerce arrangement one step further. The meat bill controls the conditions surrounding the producer because it is only through control of these conditions that we can secure a product clean and wholesome enough for interstate commerce, and Senator Beveridge says that it is only by protecting the child, by not permitting him to work until he is fourteen, that we can produce a product that is moral enough, that is decent enough, that is righteous enough, to enter into interstate commerce. If we have government in which human welfare is not to be considered as an object of direct governmental [page 4] action, and if we possess a well-rooted objection to humane legislation, I think we may congratulate ourselves that there have arisen in our midst men who are clever enough to "tackle" the question of human welfare through the Interstate Commerce Acts. Perhaps when we look at the provisions of this bill, we may be able to see that this, after all, is the most American way to get at the matter.

What are we most interested in, in this country? Along which line do our blood and sinew and our imaginations and our hopes and our desires develop? I think that we would all agree that it is along the line of industry and commerce, and that it is exactly here that American children have suffered in so far as they have been put to premature toil, because our commercial and industrial life has been so ruthless and so self-centered that it has never given them a thought. To have this labor of children protected and regulated through legislation which, in its inception, was designed solely in the interests of commercial advancement, is perhaps a case of poetic justice -- an instance of the return of the deed upon the head of the doer -- of the punishment fitted to the crime, as it were. Some of us who are members of this convention had dreamed that the regulation of the labor of children might come through educational agencies, that it might be fostered through a federal bureau of education or a bureau dedicated to all the children of the nation, as other bureaus are dedicated to the interests of cattle and grain, but apparently it is destined to come another way, and we will protect the children through the products in which their labor is embodied, as we have protected the stock yards worker through the goods which he has put into cans. However, we may in time be justly proud, if we can say that no American product enters into foreign or domestic commerce which does not represent the free labor quality of an educated producer who is exercising his adult powers. At any rate, we will be thankful that at last there is a prospect of national regulation of a national evil. 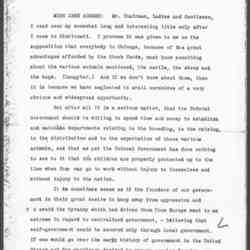 Addams discusses the responsibility of the State for the public health and sanitation and child labor.