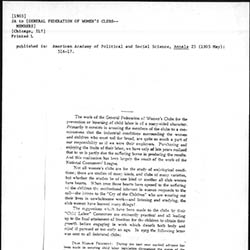 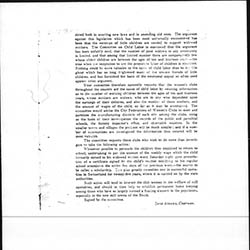 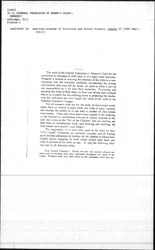 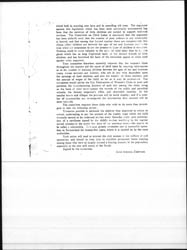 During the past year marked advance has been made in securing child labor legislation throughout the states of the Union. Women's clubs have been active in this movement which has [page 2] consisted both in enacting new laws and in amending old ones. The argument against this legislation which has been most universally encountered has been that the earnings of little children are needed to support widowed mothers. The Committee on Child Labor is convinced that the argument has been unfairly used, that the number of poor widows in any community is limited, and that among that limited number there are comparatively few whose oldest children are between the ages of ten and fourteen years -- the time when the temptation to use the premature labor of children is strongest. Nothing could be more valuable to the cause of child labor than to lay this ghost which has so long frightened many of the sincere friends of little children, and has furnished the basis of the emotional appeal so often used against sober argument.

Your committee therefore earnestly requests that the women's clubs throughout the country aid the cause of child labor by securing information as to the number of working children between the ages of ten and fourteen years, whose mothers are widows, who are in any wise dependent upon the earnings of their children, and also the number of those mothers, and the amount of wages of the child, so far as it may be ascertained. The committee would advise the City Federations of Women's Clubs to meet and partition the manufacturing districts of each city among the clubs, using as the basis of their investigation the records of the public and parochial schools, the factory inspector's office, and charitable societies. In the smaller towns and villages the problem will be much simpler; and if a number of communities are investigated the information thus secured will be most valuable.

The committee requests those clubs who wish to do more than investigate to take the following action:

Whenever possible to persuade the children thus employed to return to school, undertaking to pay the amount of the weekly wage which the child formerly earned to his widowed mother every Saturday night upon presentation of a certificate signed by the child's teacher testifying to his regular school attendance the entire five days of the previous week, -- the money to be called a scholarship. This plan greatly resembles one in successful operation in Switzerland for twenty-five years, where it is carried on by the state authorities.

Such action will tend to interest the club women in the welfare of mill operatives, and should in time help to establish permanent home keeping among those who have so largely formed a floating element in the population, especially in the new mill towns of the South.

Signed by the committee. 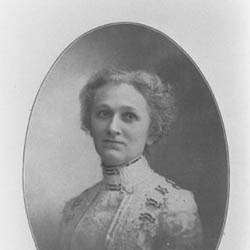