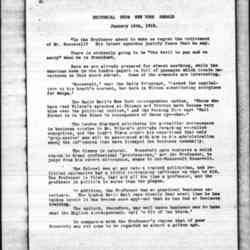 "Is the Professor about to make us regret the retirement of Mr. Roosevelt? His latest speeches justify fears that he may.

There is evidently going to be "the devil to pay and no mercy" when is he President.

Here we are already prepared for almost anything, while the American news in the London papers is full of passages which create uneasiness on this score abroad. Some of the comments are interesting.

'Roosevelt,' says the Daily Telegraph, 'lashed the capitalists to his heart's content, but here is Wilson substituting scorpions for whips.'

The Daily Mail's New York correspondent cables, 'Those who have read Wilson's speeches at Chicago and Trenton have become very blue over the political outlook,' and the Morning Post says 'Wall Street is in the blues in consequence of those speeches.'

The London Standard attributes the prevailing nervousness in business circles to Mr. Wilson's attitudes regarding so-called monopolies, and the London Times counts his assertions that only 'progressive' men will be associated with him in his administration among the influences that have dismayed the business community.

The dismay is natural. Roosevelt gave business a solid reason to dread professional 'progressives,' and the Professor, to judge from his recent utterances, means to out-Roosevelt Roosevelt.

The Colonel was at any rate a trained politician, and political exigencies had a little restraining influence on what he did. The Professor is first, last and all the time a professor, and the professor in politics is worse than the plague.

In addition, the Professor has no practical business experience. The London Daily Mail says bluntly that every time he has spoken lately it has become more apparent that he has had no business training.

The outlook, therefore, may well cause business men to have what the English correspondents call 'a fit of the blues.'

In comparison with the Professor's regime that of poor Roosevelt may yet come to be regarded as almost a golden age." 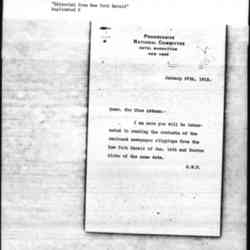 The New York Herald warns that businessmen may be sorry they chose Woodrow Wilson over Theodore Roosevelt, claiming Wilson was untrained and unfamilar with the needs of business.