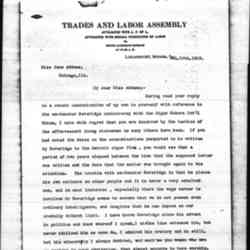 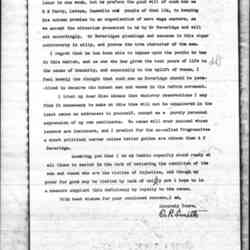 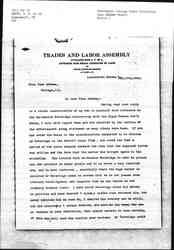 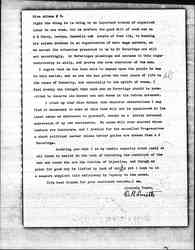 Having read your reply to a recent communication of my own to yourself with reference to the ex-Senator Beveridge controversy with the Cigar Makers Int'l Union, I note with regret that you are deceived by the tactics of the effervescent young statesman as many others have been. If you had noted the dates on the communications purported to be written by Beveridge to the Detroit cigar firm, you would see that a period of two years elapsed between the time that the supposed letter was written and the date that the matter was brought again to his attention. The trouble with ex-Senator Beveridge is that he places his own estimate on other people and it is never a very [exalted] one, and in most instances, especially where the wage earner is involved Mr Beveridge seems to assume that we do not [possess] even ordinary intelligence, and imagines that he can impose on our [credulity] without limit. I have known Beveridge since his advent in politics and know whereof I speak, I at one time esteemed him, but never idolized him as some do, I admired his oratory and do still, but his sincerity I always doubted, and mark me you women who are so zealous in your admiration, that almost amounts to hero worship, of this man; will [someday] realize your mistake. Mr Beveridge could [page 2] right the wrong he is doing to an important branch of organized labor in one week, but he prefers the good will of such men as D M Parry, Leveys, Maxwells and people of that ilk, to keeping his solemn promise to an organization of mere wage earners, so we accept the situation presented to us by Mr Beveridge and will act accordingly. Mr Beveridges pleadings and excuses in this cigar controversy is silly, and proves the true character of the man.

I regret that he has been able to impose upon the people he has in this matter, and as one who has given the best years of life to the cause of humanity, and especially to the uplift of woman, I feel keenly the thought that such men as Beveridge should be permitted to deceive the honest men and women in the reform movement.

I trust my dear Miss Addams that whatever observations I may find it necessary to make at this time will not be considered in the least sense as addressed to yourself, except as a purely personal expression of my own sentiments. No cause will ever succeed whose leaders are insincere, and I predict for the so-called Progressives a short political career unless better guides are chosen than A J Beveridge.

Assuring you that I in my humble capacity stand ready at all times to assist in the work of bettering the condition of the men and women who are victims of injustice, and though my power for good may be limited by lack of ability yet I hope to in a measure supplant this deficiency by loyalty to the cause.

With best wishes for your continued success, I am, 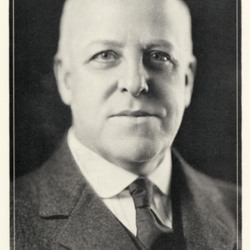 Smith writes Addams to argue that she is being duped by the character of former Senator Albert Beveridge.