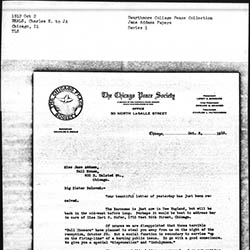 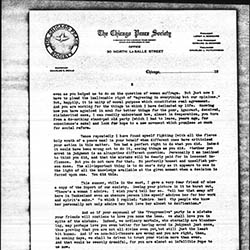 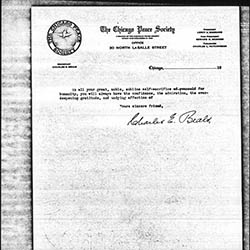 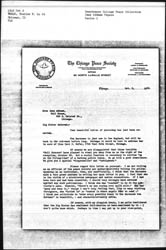 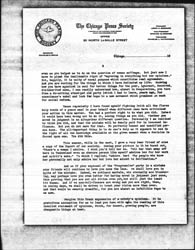 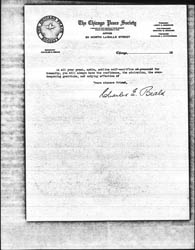 Your beautiful letter of yesterday has just been received.

The Baroness is just now in New England, but will be back in the [midwest] before long. Perhaps it would be best to address her in care of Miss Mari R. Hofer, 1753 West 96th Street, Chicago.

Of course we are disappointed that those terrible "Bull Moosers" have planned to steal you away from us on the night of the reception, October 29. But a social function is secondary to service "up on the firing-line" of a burning public issue. So go with a good conscience. We give you a special "dispensation" and "indulgence."

Please regard this letter as personal. I am not writing as an official of the peace society nor authoritatively voicing its policy. Speaking as an individual, then, and unofficially, I think that the Baroness made a very great mistake in writing her open letter to you. I feel that she is the victim of a mischievous newspaper and unwise counsellors. If I had been here and had been consulted, I should very strongly have advised against any such publication. I think she was "coached" to do it for publicity's sake. However, "there's no use crying over spilt milk." She has "gone and done it," though I can't help feeling that, like so many visiting foreigners, she "butted in" or "rushed in where angels fear to [tread]." I think [your] solicitude to "show every possible honor to the Baroness von Suttner" is beautiful, -- and characteristically noble.

Of course, with my sluggish brain, I am quite bewildered that the Big Sister has swallowed Bull-Moosism or been swallowed by it -- I don't quite know which. Perhaps in time I may get up to your view-point, [page 2] even as you helped me to do on the question of woman suffrage. But just now I have to plead the inalienable right of "agreeing in everything but our opinions." But, happily, it is unity of moral purpose which constitutes real agreement. And you are working for the things to which I have dedicated my life. Knowing how you have agonized in soul for better things for the poor, ignorant, deceived, disinherited ones, I can readily understand how, almost in desperation, you turn from a do-nothing stand-pat old party (which I had to leave, years ago, for conscience's sake) and look for hope to a new movement which promises so much for social reform.

Hence repeatedly I have found myself fighting (with all the fierce holy wrath of a peace man) in your behalf when different ones have [criticized] your action in this matter. You had a perfect right to do what you did. Indeed it would have been wrong not to do it, seeing things as you did. Whether you erred in judgment is an altogether different question. Personally I am inclined to think you did, and that the mistake will be dearly paid for in lessened influence. But you do not care for that. No perfectly honest and unselfish person does. The all-important thing is to do one's duty as it appears to one in the light of all the knowledge available at the given moment when a decision is forced upon one. You did this.

This summer, while in the east, I gave a very dear friend of mine a copy of the Report of our society. Seeing your picture in it he burst out, "There's a woman I admire. I wish you'd tell her so. Tell her that away off here in Yankeeland even an obscure person like myself admires her for her work and spirit's sake." To which I replied: "Admire her! Why people who know her personally not only admire her but love her almost to deification."

And so if your espousal of the "Progressive" party is a mistake your friends will continue to love you [nonetheless]. We shall love you in spite of the mistake. Indeed, we ordinary mortals, who eternally are blundering, may perhaps love you even better for having erred in judgment just once, thus proving that you are not all divine even yet, but still just the least bit human. And if we non-Bull-Moosers are wrong and you are right, then, in coming days, we shall be driven to trust your vision more than ever. And that would be sweetly dreadful, for you are almost an infallible Pope to us now.

Forgive this frank expression of a nobody's opinions. It is gratuitous assumption for me to load you down with even the reading of this uncalled statement of opinions, which, for honest, growing people, are changeable things at best. [page 3]

In all your great, noble, sublime self-sacrifice of yourself for humanity, you will always have the confidence, the admiration, the ever-deepening gratitude, and undying affection of 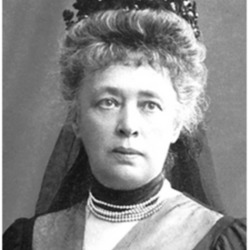 Beals is disappointed that Addams cannot attend their reception because she will be working for the Progressive Party, and believes the Baroness von Suttner should not have publicly criticized Addams for her political beliefs.