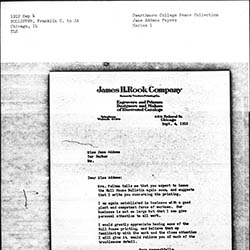 Franklin C. Hollister was a printer in Chicago. In 1884, while still in his native Wisconsin, he helped with early publications of The Oshkosh Times as a traveling or "tramp" printer alongside his brother, William. The two eventually moved to Chicago where they began The Hollister Press and founded their own printing firm, The Hollister Bros. He later went on to serve as the president of the James H. Rook Printing Company. Hollister was also a member of a national union of master printers known as Typothetæ.

Hollister married Bessie Hollister in 1897. In 1906, Bessie, at random, was snatched from the street and strangled. He remarried in 1908 to Jessie Camack. Hollister died in 1947.