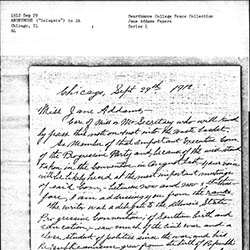 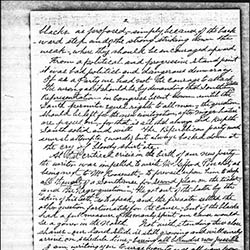 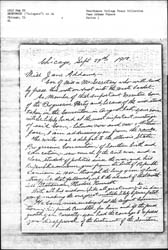 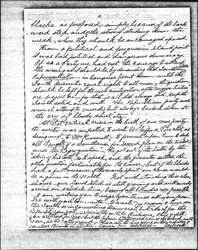 Care of Miss or Ms Secretary who will kindly pass this note on & not into the waste basket.

As member of that important Executive Com. of the Progressive Party and because of the will stand taken in the Convention in August last, -- your voice will be likely heard at the most important meetings of said Com., -- between now and Nov 5th, therefore, I am addressing you from the ranks.

With all his wisdom (like all greatness), <he> is in danger of making the one great mistake likely to prove fatal.

He came near making it at the August Convention --; his friends trembled for him and if the priest quoted you correctly -- you had the courage to express your disapproval of the treatment of the Southern [page 2] blacks as proposed, -- simple because, of the backward step and of the strong striking down the weak, -- where they should be encouraged upward.

From a political and progressive stand point it was bad politics -- and dangerous democracy. If as a Party we had not the courage to attack the wrong as it should be, by demanding that Southern <States> Representation in Congress be cut down until the South pursuits equal rights to all men -- the question should be left for the new civilization, after "nigger haters" are passed on, -- for that is all that always did keep the South solid and will. The Republican party made several attempts (words) but always backed down at the cry of "bloody shirt" etc.

At that critical crisis in the birth of our new party -- the writer was impelled to write Mr Gifford Pinchot as being next to Mr Roosevelt, -- to prevail upon him to drop all thought of a Southerner for Second place on the ticket, and the "Negro question --"; He got out of the latter by the "skin of his teeth," so to speak, and the fire-eater settled the other question fortunately for the cause, -- but if the blacks had a full measure of the manly spirit our cause would be a goner in the North. Not withstanding these close shares -- our land slide is still growing and will surely arrive on schdule time, -- barring all blunders now possible.

I am writing you to urge you to use all your powers with your Committee, to waste no money & time on the South or in converting Democrats, but reach for the Republican vote, especially in N.Y., Indiana, Ohio, & Ill. you are <not> needed in Mo, -- but the alone states need you & the Colonel until Nov --, as the battlingground, -- Place all the big guns on those 4 states & remember Blaines mistake. Yours for success -- Delegate.

An anonymous writer gives Addams advice for the Progressive Party to win the election.