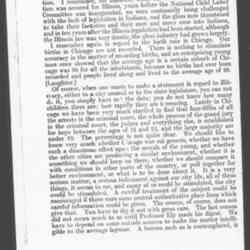 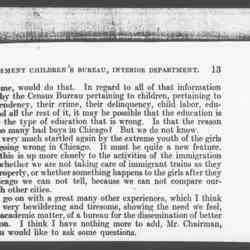 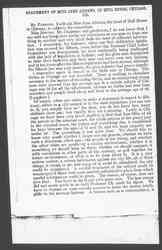 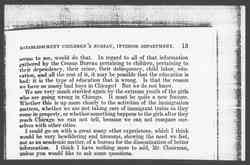 Mr. PARSONS. I will ask Miss Jane Addams, the head of Hull House in Chicago, to address the committee.

Miss ADDAMS. Mr. Chairman and gentlemen, I do not know that I can add anything, save giving my experience as one goes on from one thing to another and very much feels the need of collected information. I remember, for instance, when our first child-labor legislation was secured for Illinois, years before the National Child Labor Committee was inaugurated, we were continually being challenged with the lack of legislation in Indiana, and the glass men threatened to take their factories and their men and move over into Indiana, and in ten years after the Illinois legislation had been started, although the Illinois law was very drastic, the glass industry had grown largely.

I remember again in regard to the birth rate in Chicago. Our births in Chicago are not recorded. There is nothing to stimulate accuracy in the matter of recording births, and an enterprising young man once showed that the average age in a certain suburb of Chicago was 96 for all the inhabitants, because no births had ever been recorded and people lived along and lived to the average age of 96. [Laughter.]

Of course, when one wants to make a statement in regard to illiteracy, either to a city council or to the state legislature, you can not do it, you simply have not the data; you do not know how many children there are; how rapidly they are increasing. Lately in Chicago we have been very much startled to find that four-fifths of all the arrests in the criminal court, the whole process of the grand jury in the criminal court, the judges and everything else, is established for boys between the ages of 15 and 25, and the large majority are under 19. The percentage is not quite clear. We should like to know very much whether Chicago was sui generis, whether we have such a disastrous effect upon the morals of the young, and whether the other cities are producing a similar environment, whether it is something we should keep on there, whether we should compare it with conditions in other parts of the country, or pull together for better environment, or what is to be done about it. It is a very serious matter, a serious indictment against our city life, all of these things, it seems to me, and many of us could be stimulated, the city could be stimulated. A careful treatment of the subject could be encouraged if there were some central authoritative place from which careful information could be given. The census, of course, does not give that. You have to dig it out with great care. The last census did not mean much to us until Professor Ely made his digest. We have to depend on some outside sources to make the matter intelligible to the average layman. A bureau such as is contemplated, it [page 2]  seems to me, would do that. In regard to all of that information gathered by the Census Bureau pertaining to children, pertaining to their dependency, their crime, their delinquency, child labor, education, and all the rest of it, it may be possible that the education is bad; it is the type of education that is wrong. Is that the reason we have so many bad boys in Chicago? But we do not know.

We are very much startled again by the extreme youth of the girls who are going wrong in Chicago. It must be quite a new feature. Whether this is up more closely to the activities of the immigration matters, whether we are not taking care of immigrant trains as they come in properly, or whether something happens to the girls after they reach Chicago we can not tell, because we can not compare ourselves with other cities.

I could go on with a great many other experiences, which I think would be very bewildering and tiresome, showing the need we feel, not as an academic matter, of a bureau for the dissemination of better information. I think I have nothing more to add, Mr. Chairman, unless you would like to ask some questions.

Addams testifies on the lack of statistics available to adequately analyze the welfare of children in Chicago and argues that a bureau could collect and disseminate such data.

B-ECBID - Establishment of Children's Bureau in the Interior Department