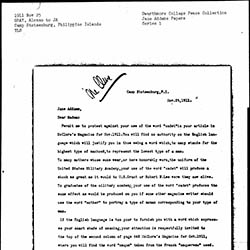 Alonzo Gray was a soldier in the United States Army who graduated from West Point in 1887. He participated in the Spanish American War with the 5th Cavalry. In 1903, his regiment was stationed in the Philippines. Gray entered officer training in 1907, graduating in 1909. He was promoted to Major in 1911 and sent to China as part of the Intelligence Service. He became a Lt. Colonel in 1916 and a Colonel in 1917; Gray participated in World War I with the 6th Cavalry and 140th Infantry in France. After the war, he commanded military bases in the United States in Texas, Arizona, and Virginia. In 1910 Gray published Cavalry Tactics as Illustrated by the War of Rebellion.

Alonzo Gray married Josephine Drew in 1897. They had two daughters. Gray died in 1943.