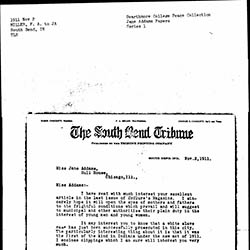 Frederick A. Miller was the president and editor of the South Bend Tribune. Self-educated, Miller began work as a newsboy and in 1892 became the owner of the paper when his father died. Miller became president in 1924 and oversaw the growth of the paper's circulation. He supported temperance and barred liquor advertisements from the Tribune. He also opposed racial intolerance and fought against the Ku Klux Klan. Miller was active in Republican state politics, using the Tribune to comment on and influence political races, but refused efforts to get him to run for governor. Miller was a founding member of the Associated Press and served as the president of the South Bend Chamber of Commerce.